Almost every sportsperson who has reached the top of their field was inspired by an athlete that came before them. Often it’s one from their own sport, but sometimes that inspiration can come from an entirely different discipline. In this series, BBC Sport Scotland speaks to Scottish sporting stars about some of those heroes.

This week, Olympic curler Eve Muirhead talks about her sporting hero - Jessica Ennis, a gold medalist in the heptathlon at the 2012 London Olympics and a three-time world champion. 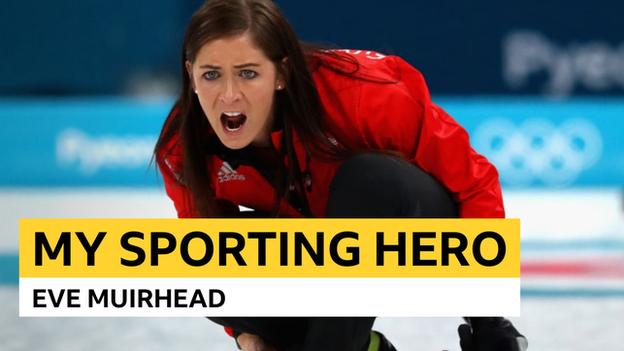 I was fortunate enough to be in the Olympic Stadium for Jessica Ennis’ finest hour, winning heptathlon gold on that unforgettable ‘Super Saturday’ at London 2012.

The atmosphere was just unbelievable. Unless you were there it’s really hard to describe. I remember her running that last 800m, the crowd going mental and I don’t imagine she would have been able to hear herself think.

I just remember thinking how much pressure was on her that evening. There was so much expectation for her to win the gold medal. She was the poster girl of the Games and for her to deliver under that pressure is something I’ve always admired and thought was pretty amazing from her. It was phenomenal.

I was very sporty growing up and any sport I got the chance to try or take part in I was first there. I’ve got a very competitive nature as well so I wasn’t just first there, I always wanted to win as well. I’ve always had an interest in athletics, always enjoy watching it on TV and seeing all the different events. It’s something that I’m still really into.

Jess always comes across as very humble and I know she is like that. I don’t think she ever tries to be someone that she isn’t. Now that she is retired what I like is she is now trying to help the next generation. That’s what we need in Great Britain, to try and bring young athletes through to follow in these superstars’ footsteps.

We remember Jess now as a highly-successful athlete, the golden girl of London 2012 who delivered when it mattered most. But every athlete goes through highs and lows and she was no different. There are very few athletes who stay at the top consistently winning golds and world championships. It’s almost impossible.

Jess had a huge setback when she missed the Beijing Olympics in 2008 through injury. When she came back for the 2012 Games, she had all the pressure in the world on her shoulders and delivered the gold medal.

It’s something I’ve been through myself on a smaller scale. I had a setback last year when I had my hip surgery and it takes a huge amount of time and effort to get back to being fully fit and on good form. A lot of people think it just happens but it doesn’t. It takes a lot of blood, sweat and tears behind the scenes.

That’s something that I know Jess showed a lot of courage with, a lot of grit and determination to come back even stronger.

I've always really admired heptathletes. It’s not just one event they have to focus on, they’ve got seven events they need to practice and be very good at. I know what it takes to train for one event in curling, but to have another six must be so difficult and so different to your normal athlete. I can only imagine what it must be like for the coaches and all the support staff around them trying to plan that time and fit in training for all these different disciplines. That’s something I really do take my hat off to.

I’ve never had the opportunity to meet Jessica, but I would love to. The closest I came was when she tweeted me a good luck message before our bronze medal game at the Sochi Olympics in 2014. That was pretty cool.