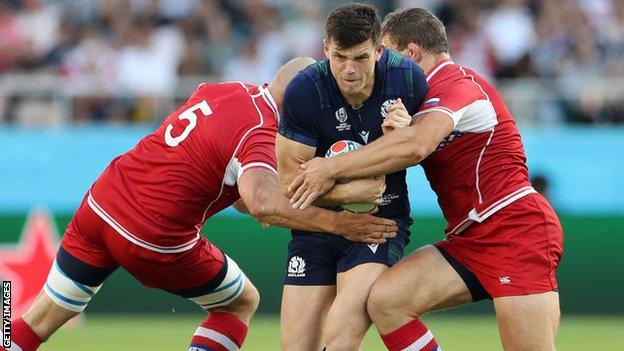 Scotland's World Cup game with Japan will go ahead on Sunday, World Rugby has confirmed.

Gregor Townsend's men would have been eliminated from the World Cup had the Pool A finale been cancelled.

The game was under threat from Typhoon Hagibis, with a switch of dates already ruled out.

The host nation lead Scotland by four points after three victories and a cancellation would have resulted in the match being declared a draw.

Group rivals Ireland have secured their place in the last eight with a bonus-point win over Samoa.

Scotland must now take four more points than Japan to progress to the quarter finals.

The pool runners-up will face New Zealand in the last eight next Saturday, while the pool winners will face South Africa next Sunday.

An inspection of the stadium in Yokohama by World Rugby took place at 22:00 BST on Saturday, with an announcement made nearly five hours later.

Sunday's World Cup Pool B match between Namibia and Canada in Kamaishi was also cancelled because of safety concerns.

World Rugby rules state that "where a pool match cannot be commenced on the day in which it is scheduled, it shall not be postponed to the following day and shall be considered as cancelled. In such situations, the result shall be allocated two points each and no score registered".