"It was the scariest night of my life, having no idea of what's going on or recollection of what's happened and being totally floored physically."

Kieren Mooney was a talented young athlete with plenty of potential when a run with a friend took a terrifying turn. Called a "freak of nature" by doctors, the then 18-year-old had what they could only suggest was a heart attack.

Five months and an implanted heart monitor later, Mooney is not only back running but, in February, competed in his first race. Speaking to BBC Scotland he recalls the little he can of that night, the mystery woman who came to his rescue, and making the most of his life now.

'It was just totally bizarre'

Mooney does not remember what happened to him, or indeed anything in the weeks running up to the incident, instead relying on those who came to his aid to fill in the blanks.

In August 2018, the Giffnock North runner headed out for a 10k run around Newton Mearns with his friend Allistair Gray. "It was only a wee bit quicker than normal and about 9.5k in I apparently said to him 'run on, I'll catch you at the end, I'm quite tired'. He finished it 30 seconds later and waited and waited for me."

Eventually, Gray went back and found Mooney collapsed on a mossy wall, confused, unaware of where he was and unable to stand. Without phones and with the gravity of the situation becoming clear, Gray attempted to flag down help. One man threw a bottle of water out his car window but nobody was stopping. "My memory starts to come back when a woman pulled up and I was bundled into the back of her car - I've no idea who this woman was to this day but she helped us back to my grandparents' house.

"I had no strength in my legs, I couldn't walk, I was on a totally different planet. People were asking me questions like what day of the week is it - I had no idea of any days of the week let alone what day it was." His last memory of the night was "vomiting everywhere, a splitting sore head and confusion."

Mooney woke the next morning in the Coronary Care Unit (CCU) at Glasgow's Queen Elizabeth University Hospital with only vague memories of the night before. "I've been told by many different doctors I am a freak of nature," he said. "This 18-year-old who was at a pinnacle of fitness with nothing in my family to suggest this would happen, it was just totally bizarre." 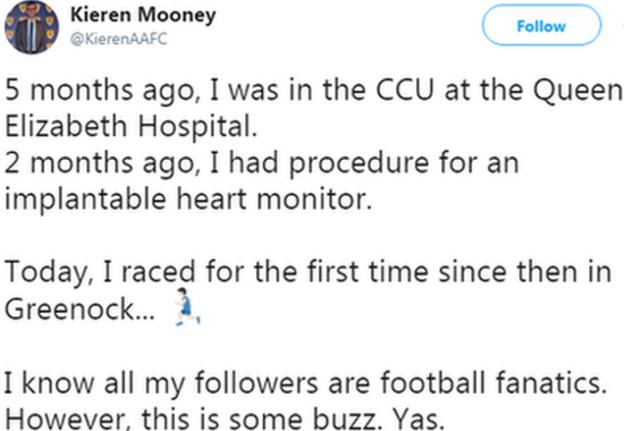 'I hear every heartbeat louder than before'

While he said doctors "never quite got to the bottom of it", Mooney does take comfort in the heart monitor they implanted in December, which allowed him to get back to life as an active 19-year-old. He now has around the clock, direct access to the CCU at the hospital through his mobile phone, where they are able to monitor him 24/7.

"You can feel it if you rub your hand along my chest," he explained. "If I go out on a jog and feel any symptoms at all I can click a thing on the app to say I feel dizzy. Within a couple of hours they will have checked to see whether it was a thing with my heart and give me a ring either way, so it's been brilliant to have peace of mind."

This journey has been "a long slog" for the university student but, on 3 February, Mooney raced in the five-mile Renfrewshire Road Race Championships, surprising himself with a new personal best.

"It does play in the back of my mind, when I'm running you hear every heartbeat louder than you did before, but I just use it as motivation. I'm not scared of it; I'll just use it to crack on."

If asked a year ago, Mooney would have considered pursuing a potential athletics career but now he runs just for the enjoyment.

He still trains six nights a week on top of studying at Strathclyde University for a career in marketing and has been appointed as a Scottish Football Association youth ambassador, as well as being actively involved with his beloved Alloa Athletic. He even finds time for the odd game of five-a-side.

"This whole event has made me take everything less for granted and now it's just racing to enjoy it and anything that comes from it just a bonus," he says. "It was a horrible time and it's made me appreciate the simple things more. I am a competitive person, but this has been a bit of a reality check.

"I give it a light hearted feel when I talk about it with my friends but it could've been so much worse. I've got so much going on in my life just now but I just want to grasp everything."