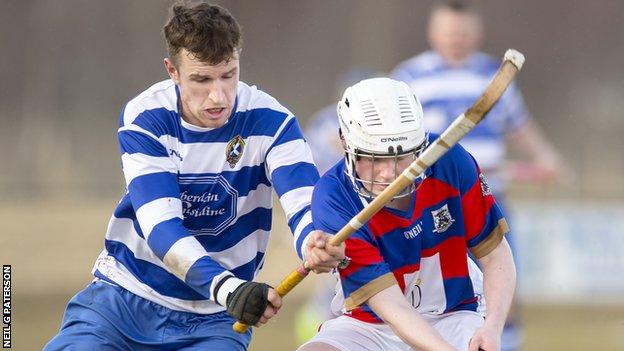 Underdogs Kingussie, who have not finished above Newtonmore in the Marine Harvest Premiership for almost a decade, pulled off a shock 1-0 victory in the season's first Badenoch derby on Newtonmore's pitch at the Eilan.

Lovat defeated Kyles by the same score in Kiltarlity to move to two points behind leaders and champions Kinlochshiel, whose game against Oban Camanachd was postponed.

In the battle of the two promoted sides in Portree, a hat-trick from Kevin Bartlett helped Caberfeidh sweep Skye aside 5-1, while there was a goal apiece for Glenurquhart and Lochaber in Drumnadrochit.

Kilmallie overcame an early setback to edge hosts Fort William 3-2 in the big derby game in the National Division.

At the Eilan, Savio Genini found the net after 12 minutes for Kingussie, who then held on against everything Newtonmore could throw at them.

In 2015, Kingussie had to survive a relegation play-off while their rivals lifted the sixth of their seven consecutive titles. Over the next two seasons, they narrowed the gap to 19 points, then just three, and now lead Newtonmore by a single point in these early stages.

The last time Kingussie finished the season ahead of their local rivals was when they won their most recent Premiership title in 2009.

Greg Matheson left it late to clinch victory for Lovat with only three minutes left on the clock when he penetrated the Kyles defence.

When Skye and Caberfeidh were both promoted in 2017, it was with Skye as clear National Division champions. The hosts began strongly when Will Cowie scored early but Cabers struck back in style.

Bartlett scored twice in three minutes to send the visitors in ahead at half-time. Craig Morrison then got his own double in five early second-half minutes before Bartlett upgraded to a hat-trick late on.

It took an hour for the deadlock to be broken in the remaining Premiership game where Shaun Nicholson opened for Lochaber. However, just five minutes later, Conor Golabek grabbed Glenurquhart's equaliser.

Fort William got off to a roaring start in the National Division local derby, the clubs' first league meeting for four years, when Arran MacPhee gave them the lead after just two minutes.

However, they failed to keep Kilmallie out of the game and Daniel Stewart equalised midway through the first half before Michael Rodger put Kilmallie ahead early in the second and Stewart made it 3-1 just a minute later. Fort did regain some hope from a Graham Campbell goal, but Kilmallie held on.

Inverness continued to show signs of improvement although they were edged 2-1 by Inveraray at the Bught. It was goalless for over an hour and Lewis Montgomery only won it for the Argyllshire side in stoppage time.

A Ross MacMillan double played a big part in a 4-3 victory for Oban Celtic over Strathglass in Cannich, paving the way for Celtic to extend their lead to one point.

Both sides scored late in a 1-1 draw between Glasgow Mid Argyll and Beauly at Yoker.