Caley Thistle lie five points adrift at the bottom of the Premiership with just five games of the season remaining.

"Ross County [are] probably out of the relegation battle but we can drag them back into it."

Foran concedes that it was the club's directors who proposed the idea of adding more experience to the coaching team, but insists that he identified Malpas as the man to appoint.

"The board thought it would help by bringing someone else in," Foran said. "An older, more experienced person.

"We're all trying to fix the problem. I had a think who was out there, who I could trust, who had the game knowledge and Scottish Premiership knowledge, so I picked Maurice.

"The board recommended I bring someone in. There was no problem with that."

With just four wins from 33 league fixtures, retaining their top-flight status seems an uphill task for Inverness, particularly given their record of conceding more goals than any side in the Premiership.

"Defensively as a team, it hasn't been good enough," Foran said.

"[We've] probably been too open at times attacking, so we've worked on that. There's obviously been a problem; we've conceded too many goals.

"Maurice has over 50 caps. He's managed, he's been assistant manager. But the main thing for me, you can always trust Maurice.

"He's old school and is never going to stab you in the back. He'll always say it straight to your face and he's good to have around the place." 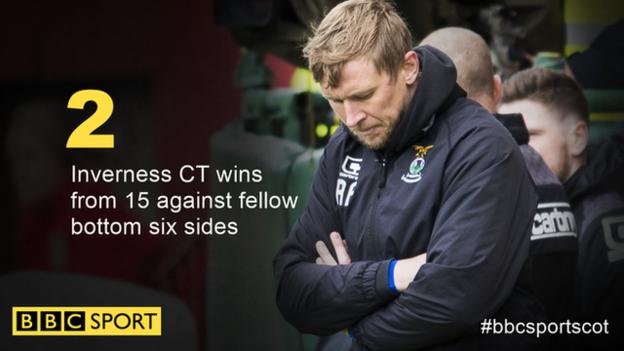