"I used to think I was He-Man," jokes Stevie Ray of his teenage years in Kirkcaldy.

"I was always getting into fights at school. I was going out drinking with my friends and fighting and getting into trouble.

"MMA (mixed martial arts) has led me from that life. Now I'm actually making money instead of paying fines. It has changed my life."

The 27-year-old Fifer enters the Ultimate Fighting Championship's (UFC) Octagon at Nashville's Bridgestone Arena on Saturday night for the biggest fight of his career.

Preparing to punch, kick, knee and elbow the man considered the UK's top lightweight is his American opponent Joe Lauzon, five years older and with a record of 27 wins and 13 defeats.

Ray knows a win Stateside would boost his earning power and set him up nicely for a major contest in front of 13,000 fans when the UFC rolls into Glasgow's SSE Hydro on 16 July. When the UFC came to Glasgow in 2015 the event sold out in a few hours.

"He has a big following," says Ray's agent Ajay Chander. "But he can really make a name for himself in the United States against a respected fighter like Joe Lauzon. I have no doubts he is going to handle it."

Ray is bright and chatty, flitting easily from discussing the demands of raising Lyle, six, Millie, four, and two year-old Myla with his partner Natalie, to describing the various holds and chokes with which to force an opponent to "tap out", to submit.

A harsh lesson in Kirkcaldy

It's an unusual and precarious way to make a living but once he discovered MMA Ray was hooked.

"I was just one of those tough guys," he recalls. "I was probably going down the wrong path, getting into fights in the street and stuff.

"My friend Dean Crichton had been training at a place in Kirkcaldy run by a guy called Jim McKelvey. He had a cabin in his back garden, all matted out.

"The coach said it wasn't a public club but said I could watch and if I liked it I could come back when he was next taking someone on.

"Only two guys turned up for the class and one guy wasn't feeling well so he said I could jump in. I ended up spewing in the guy's plant pots because it was so tough.

"But that was it, I fell in love with it. I had been was going to the gym and trying to get big yet I was rolling with guys who were nine stone and they would put me in chokes and I would have to tap.

"I would never have thought that someone that small would be able to do that." 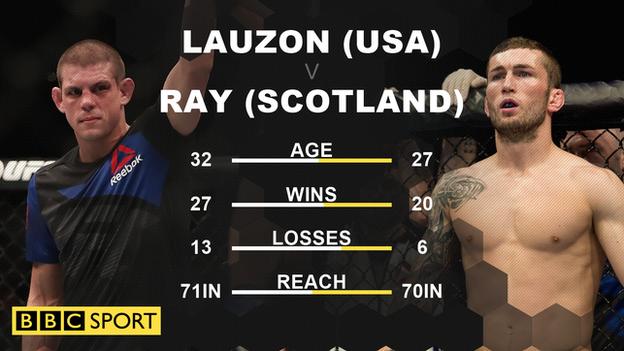 Ray began to learn the various aspects of mixed martial arts - boxing, Brazilian jiu-jitsu, judo, wrestling - and won all seven of his amateur fights before turning professional, by his own admission probably too quickly.

He fought five times as a pro that same year, winning four out of five, and his record now stands at 20 wins and six losses.

His main coach is James Doolan and he traverses Scotland every week to train at three gyms - Whitburn's Higher Level Martial Arts, Glasgow's Griphouse and D Unit in Dumbarton - which help develop different aspects of his fighting armoury.

"I'm always trying to evolve. I don't want to be one dimensional," says Ray.

To some observers, the UFC contests, where kicks and elbows to the head are permitted, are just too brutal, but for its devotees its intensity, inherent violence and the bravery and technique of the fighters make it thrilling.

Getting used to pain

Ray has had a spell out for knee surgery but his most obvious injuries are his cauliflower ears from the abrasion during headlocks.

"Funnily enough, it doesn't really hurt getting punched in the face. Your body gets used to it," he says of MMA's perils.

"But if somebody nipped me or pulled my hair it would be sore.

"If you are in a tight submission, an arm-bar or a kimura, it's best to tap because your arm is going to be snapped. For me, the biggest thing is the nerves. It's knowing everyone is relying on you, depending on you, watching you."

Ray recently signed with the EPOK Agency, who handle, among other things, his contracts, training camps, brand image and endorsements.

Chander says the company had been monitoring Ray for a while.

"He fits the criteria of what we look for in an athlete, someone with great potential," says the agent.

"I really feel he has a big future. He's only 27, he has a lot of time to develop. There's an opportunity for Scotland to have a new sporting hero. I've seen the way the Scottish fans connect with him."

Ray signed his first four-fight UFC contract in April 2015 and after three wins the organisation renegotiated another four-fight deal with him.

In his second contest of the new deal, he beat Ross Pearson, the highest-rated lightweight in the UK, on a split decision in Belfast.

"This will be my third fight. If I win this I will renegotiate again," he says.

"If I get a good pay day I will arrange my wedding for next year."

Stevie Ray and fighting - that's a marriage already in place.

Listen to Stevie Ray talk about Saturday's fight in Nashville on BBC Radio Scotland's Sportsound on Friday, at approx 19.45-20.00 BST.