In mid-December, Glasgow travelled to Paris to play Racing 92 in a high-pressure Champions Cup match, the kind that could have spelled death to the Warriors had they lost it.

It was the kind of occasion that would have captured the attention of Warren Gatland, the Lions coach. Since he got the job, Gatland has placed great store in British and Irish teams going to intimidating places - and winning. That, after all, is what the Lions are going to have to do in New Zealand this summer.

Glasgow won that game. It was a tumultuous performance. Finn Russell was man of the match - no mean feat given he was up against Dan Carter. The Glasgow forwards were immense. Jonny Gray made 19 tackles in what was, arguably, his finest ever performance.

A little over a month later, Glasgow were on their travels again. When they went to Welford Road, where the hosts had lost once in Europe in 10 years - the heat couldn't have been any higher. They had to beat Leicester to make the last eight. It was their be-all and end-all for the season. A massive pressure game. Glasgow won 43-0.

Every one of their players routed their opposite number. All of a sudden, Lions-watch, the game so beloved by pundits in all four countries, started to have a whole lot more Scots in the equation. When Vern Cotter's team turned over Ireland on the opening weekend of the Six Nations, the forecasts for Scots in New Zealand went north.

Now the merits of a dozen players were being discussed. Stuart Hogg, the one Scottish banker at the beginning of the season following the cruel loss of another banker, WP Nel, to injury, was joined in the conversation by Tommy Seymour, Huw Jones, Alex Dunbar, Russell, Greig Laidlaw, Fraser Brown, Zander Fagerson, the Gray brothers, Hamish Watson, Ryan Wilson and John Barclay. Even Josh Strauss, playing his very best stuff at the time, was mentioned.

Laidlaw, 100% with the placed ball and brilliant in leading his team through the closing minutes against the Irish, was suddenly being mentioned as a possible midweek Lions captain.

Like a rugby version of the Grand National, there was a faller at the second fence. In Paris, Laidlaw was invalided out of the Six Nations. The Scottish scrum took such a pounding that Fagerson stumbled there as well, but most others galloped on. Hogg scored another try, Brown, the Grays, Strauss and Watson were outstanding.

Scotland didn't win in Paris but they dogged it out and got a losing bonus point that they probably had no right to get. In adversity - players dropping like flies through injury - they stood up.

What was called the 'big test' was the visit of the Welsh, who had so many Lions veterans in their ranks. The argument went that if Scotland could out-play Wales then Gatland would have to pay respect to that. The Scots were on the back foot for the opening half and then delivered a dominant 40 minutes.

They scored 20 unanswered points in the second half and won in a relative canter. Watson was a revelation. Wales had Sam Warburton and Justin Tipuric on the pitch but when Alun Wyn Jones was asked about the pivotal performer on the day he mentioned Watson and the chaos he wreaked on the Welsh breakdown. Wales were turned over 17 times.

Russell comprehensively out-played Dan Biggar. Brown out-played Ken Owens. Watson outshone Warburton and Tipuric. Jonny Gray with 15 carries was the best second row on the pitch. Ryan Wilson with 18 carries was the best number eight. The Scottish back three and the Scottish midfield offered more than their Welsh counterparts. Lions-watch now had Scots all over the radar.

And then, Twickenham. Gatland was in Edinburgh that week. He did some media stuff. When he spoke again about the need to see players going into a hostile environment and performing there was no mistaking his message. He laid it on with a trowel. This was another fence that the Scottish boys needed to clear.

Twickenham turned out to be Becher's Brook and The Chair rolled into one. Down they came. That weekend, and the one that followed, was a wounding one. The night before England opened up against Scotland, Wales rediscovered themselves against Ireland. Then the following weekend Ireland rediscovered themselves against England. Some big names were jockeying for position.

For some of the Scots there was a chance to make amends for Twickenham and to give Gatland more of what he wanted - Glasgow's Champions Cup quarter-final against Saracens. It didn't happen. Watson's excellence, meanwhile, was being diluted amid the awfulness of Edinburgh's season.

What started off back in the autumn as a possible feel-good story for Scotland is now looking altogether more chilling. Hogg is a shoo-in for Gatland's squad and it would be a surprise if Seymour doesn't make it. The wing is a predator, magnificent in the air, strong defensively and has surely done enough.

Sean Maitland also has to be in the conversation on the wing. His Saracens team-mate, Duncan Taylor, has been outrageously unlucky with injury, but will still go close. He's big and tough, creative and intelligent. A serious player. Had he been fit to play in the Six Nations he might now be considered a favourite to make it.

Laidlaw was denied the chance to lay down a major claim, but it's as if he doesn't exist now. A forgotten man. The top two scrum-halves are Conor Murray and Rhys Webb. Ben Youngs is suggested as the third. If he is, he's an vulnerable third. Laidlaw steered Scotland home wonderfully against Ireland. He's clever, mentally tough and has a boot that rarely lets his team down. As a midweek captain, the Lions could do a whole lot worse.

Take away the Twickenham horror-show and Fraser Brown is not far away. The leading three hookers, it would appear, are Rory Best, Jamie George and Ken Owens. Nobody will forget Twickenham, but nobody should forget either what he did in victory in other pressure games against Racing and Leicester, Ireland and Wales. Brown raged against the Saracens machine as well. He went down, fighting. Is Owens really that far ahead of him?

Zander Fagerson is worthy of consideration as a seventh prop - if, indeed, it's true that Gatland intends to bring seven as opposed to the usual six. The vibe right now is that Wales' Tomas Francis makes it. There's a case to be made that Fagerson's ball-carrying makes him a better bet. 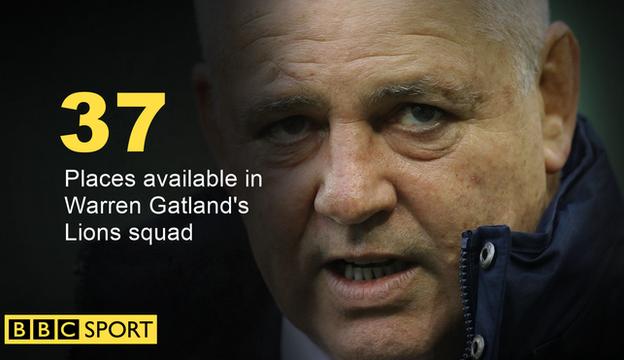 The Grays look to be done, shunted out of the reckoning by a championship that petered out and by rivals who finished thunderously. Watson is one you really root for. He has maintained high standards throughout the farrago of Edinburgh's season. He was exceptional at various points during the Six Nations. He bossed an exalted Welsh back-row. And yet you can't see him making it. The competition is beastly.

It's been said, by Gatland and others, that because there is no Scot on the coaching ticket that Scottish players might be at a disadvantage. Gregor Townsend turned down a role as did Jason O'Halloran, an adopted Scot, who was Cotter's attack coach. It's an odd argument. Gatland has eyes in his head. He also has a phone, which he can use to get information, if he wants it.

Doomsday scenario is one Scot: Hogg. A sliver less than doomsday is two: Hogg and Seymour. Fatalism begins to sink in after that. There could a third, but trying to read the Gatland tea-leaves, it's hard to see a fourth. It's a brutal business, this.

The speculation will end around midday on Wednesday. The post-mortem will follow swiftly.