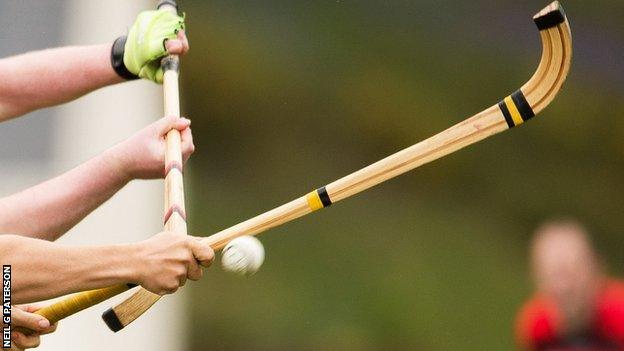 Under glorious sunshine, Fort William and Skye met at Invergarry's Craigard Park to battle it out to lift the first silverware of the 2014 shinty season.

Not only was it to be the first silverware of the 2014 season, history was to be made, as the Camanachd Association introduced its newest trophy, the RBS MacTavish Plate.

Both Fort William and Skye had a number of young men on the field experiencing their first cup final and nerves evidently played their part in the opening 20 minutes for both sides.

With the game racing from end to end, it was Fort veteran Gordie MacKinnon who pounced first and open the scoring on 33 minutes with a superbly taken goal.

It was however at this stage that the Invergarry sharpshooter was loading up his hamstring rifle and, with 10 minutes or so before half-time, through his scope he took aim and bang, my hamstring was gone!

He wasn't finished there!

It wasn't long before he had reloaded and claimed another victim, as Fort's Stevie Stewart also limped off.

Skye regrouped and on the 77th minute equalised through Jordan Murchison with a stunning goal to take the game into extra-time.

With a number of injuries and fatigue issues at both ends under the Glengarry sun, the game was literally in the balance and could have gone either way.

However, it was MacKinnon once more who stepped up to the mark for Fort to slip the ball past the Skye keeper.

And this in-turn gave Fort keeper and skipper Paul 'Felix' MacKay the opportunity to lift his first silverware for the club and the new MacTavish Plate high in the air.

This was the catalyst for a wild party in the Fort William club house until the wee small hours, which went on to prove that the 'Plate' may not have held a lot of bottles of whisky in it, however certainly managed plenty of bottles on it.

As I touched on last week, the Camanachd Cup always brings along surprises and this week was no different, with the exit of Lovat at home to Kingussie.

There were however no surprises at Bught Parks, Inverness, as Inveraray breezed their way through to the last eight with a 6-1 over the home side. This now confirms the quarter-finals as follows:

The draw is very interesting and each and every club will be thinking of winning their fixture and drawing the winner of Skye and Kilmallie in the semi-finals.

That's not to say that they would then win that fixture however because so many of the big clubs keep clashing in the draw. The potential is there for a Camanachd final we have not seen in years, possibly even ever.

So what are your predictions?

Are there more surprises to come and if so who do you think will progress through to the semi-finals?

Let's hear your thoughts on whose hands you have tipped to hold the prestigious prize aloft this year.

Forget your World Cup predictions, shinty's Camanachd Cup is where it's at.