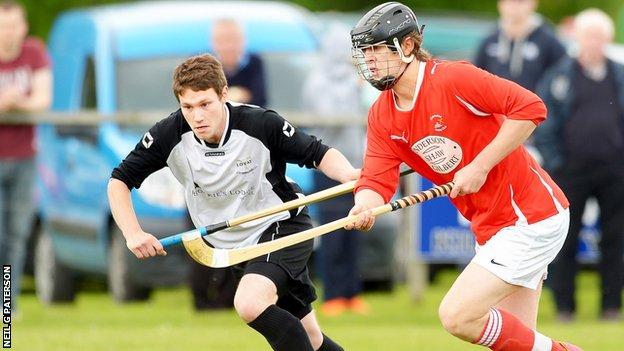 RBS MacTavish Cup holders Lovat ensured a repeat of last year's final against Glenurquhart after beating Kinlochshiel 4-0 in their rearranged semi-final at Kiltarlity.

A double from Greg Matheson split by one each from Lorne MacKay and Graeme MacMillan ensured a comfortable win for Lovat.

Champions Newtonmore took advantage of Lovat's diversion to cup duty and extended their lead in the Orion Premiership from goal difference to two points with a narrow 1-0 victory over Kyles at Tighnabruich.

All that made the difference between old rivals More and Kyles was Glen MacIntosh's goal just after half-time, with Newtonmore now having played a game more than Lovat.

Kingussie missed out on the chance to go second by losing 2-0 at Inveraray. A second-half Ruaridh Graham double did the trick for Inveraray, who move up to fifth in the table.

Meanwhile, Glenurquhart ensured that bottom side Lochaber are still seeking their first win with a 2-0 success in Drumnadrochit.

A goal from James MacPherson in the opening minutes and another from David Smart midway through the second half helped Glenurquhart successfully follow up last week's cup victory over Newtonmore with two league points.

Beauly went top of the Marine Harvest National Division with a 3-2 away win over Glasgow Mid Argyll.

The home side's prolific Craig Anderson brought them back level at half-time after Jack MacDonald and Sean Stewart had put Beauly 2-0 up. The winner then came from David MacLean in the second half.

Gordie MacKinnon and Daniel Stewart had Fort William two up against Glenorchy at Dalmally in the same league, but Grant MacPherson scored late and John Sartrain netted in the last minute to square the game.

And a Craig MacIsaac hat-trick led the way for Kilmallie in their 10-0 annihilation of luckless visitors Bute.