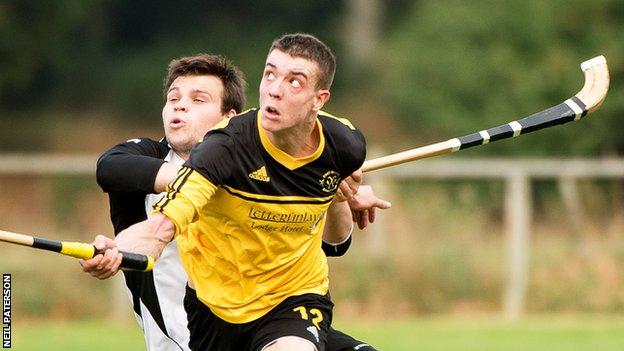 This shinty season is certainly going out with a bang since a single afternoon confirmed Fort William's relegation from the Orion Premiership while champions Newtonmore suffered their first league defeat.

And a final game victory for Ballachulish earned them a play-off for the South Division Two title, the last remaining issue of 2013.

Both outcomes capable of sealing Fort William's fate actually came to pass, although Fort did at least get a single point themselves away to Lovat, but it was not enough.

Kevin Bartlett opened for Lovat after just three minutes and Bryan Simpson equalised midway through the first half, but that was it.

On the strength of that alone, Fort William - winners of the Camanachd Cup five times in the six seasons up to 2010 - will be playing next season in the restored National Division One.

However Kyles themselves, the only other side theoretically capable of relegation, also did enough to ensure their own safety.

This came in the form of a 5-4 scoreline at Tighnabruaich which, in addition, handed Newtonmore their first league defeat of the season in their 17th and penultimate game. And it was a cliffhanger.

Fraser MacKintosh opened for More but two from Roddy MacDonald swung it the other way.

Mackintosh's second - and two in as many minutes from Glen MacKintosh - made it 4-2 Newtonmore.

However Kyles battled back and within 13 second-half minutes, John Whyte scored, MacDonald completed his hat trick and Dunkie Kerr's winner grabbed some retribution for Kyles following their Camanachd Cup final defeat by 'More on September 14th.

A 3-1 home win over Inveraray's reserves means that Ballachulish will now play off against Kyles' second team at Strachur on Saturday 5 October for the Marine Harvest South Division 2 title.

Ballachulish, who are a single-team reserve standard club, have already lifted the Sutherland and Bullough Cups.

And the shinty hurling internationals against Ireland beckon again with the final trials in Fort William on Sunday 29 September for both senior and under 21 teams to play at Croke Park Dublin on 26 October and Bught Park Inverness on 2 November.