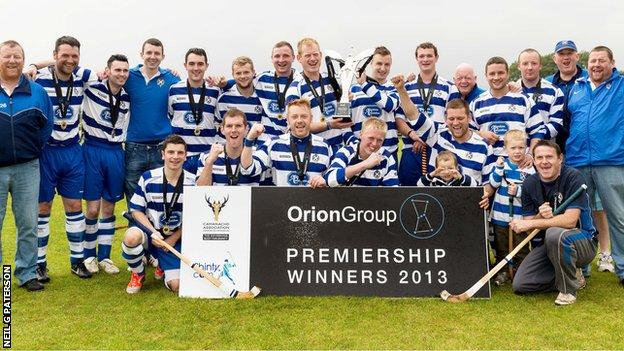 Two weeks after clinching their fourth consecutive title, Newtonmore were presented with the Orion Premiership trophy after their 2-0 home win over Fort William, who are still not arithmetically relegated.

Fort's most slender of lifelines is a result of Kyles only getting a single point against Glenurquhart on a day when Kinlochshiel also guaranteed safety with a draw with Inveraray.

It was those regular net-finders Fraser MacKintosh, midway through the first half, and Danny MacRae, midway through the second, who created a perhaps rather restrained score-line for the champions against a Fort side which, between starting twelve and bench, fielded no fewer than seven juveniles.

The presentation had been delayed at 'More's request until after last Saturday's Camanachd Cup Final. This means that on three consecutive Saturdays the Badenoch club have either won or received the game's two biggest awards.

Kyles' 1-1 draw with Glenurquhart at Tighnabruich means that Fort still cling on to their Premiership status, albeit with virtually no grounds for confidence.

Fraser Heath opened for Glen but while Thomas Whyte equalised on the hour, Kyles failed to grab the second point which would have finalised the composition of next season's eight-team Premiership.

For Fort to survive they now need to beat runners-up Lovat away next Saturday, and Kyles, to lose their last four games in parallel with a 23-goal turnaround.

However the middle of the Premiership has been so tight this season that should Kyles go on to win all of their remaining games they would finish the season in third place.

It was 3-3 between Kinlochshiel and Inveraray with Connel Fraser and Jordan Fraser putting 'Shiel 2-0 up before Neil Campbell and Peter MacIntyre squared it. Duncan Ach MacRae scored 'Shiel's third but MacIntyre got his second equaliser.

A 4-2 success for Lochside Rovers at Taynuilt completed the Marine Harvest South Division One programme.

This means that next season's restored National Division One will comprise Kilmallie, Beauly and Caberfeidh from the North and Glasgow Mid Argyll, Bute and Glenorchy from the South, along with Oban Camanachd and whoever finally takes the second Premiership relegation place.

A 6-1 victory for Sutherland and Bullough Cupholders Ballachulish at Aberdour means that if they can beat Inveraray on Saturday 28 September they will have a play-off against Kyles to complete the reserve team treble.