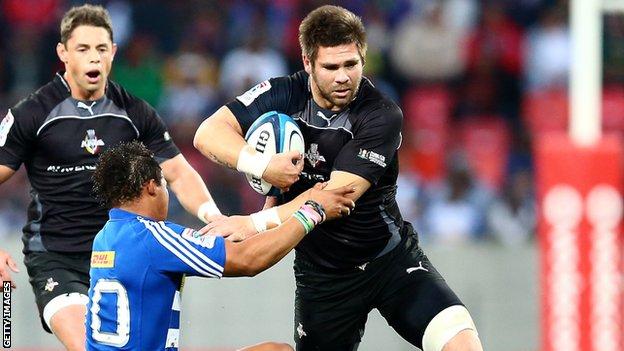 Edinburgh have reached an agreement to sign forward Cornell du Preez on a two-year contract after the 22-year-old South African left Southern Kings.

He is expected to arrive later this month, subject to a successful medical and visa application.

Du Preez follows who took him to Southern Kings last year, to the Pro12 club.

Solomons said: "It was universally accepted that he was an absolute star in his first Super Rugby season."

Du Preez, who can play blindside flanker and at number eight, joined the Kings franchise after the 2011 Junior World Championships.

And the back-row impressed Solomons, who was their director of rugby, so much that the coach has quickly moved to bring the player to Scotland.

"This signing is fantastic news for the club," said his fellow South African. "Cornell is the complete package.

I have a very good relationship with Alan Solomons and Omar Mouneimne, who've had a huge influence on my career and in my joining the club

"He's very strong physically, is an exceptionally good carrier, has very good skills and is a powerful and confrontational defender."

Du Preez played in the Varsity Cup for NWU-Pukke and the Leopards at age-group level before being part of the South Africa Under-20s team that played at the 2011 IRB Junior World Championship.

He helped Eastern Province to an unbeaten 16-match unbeaten run to lift the Currie Cup First Division title before leapfrogging the domestic Premier Division into the Super Rugby set-up.

Du Preez, who had signed for Eastern Province Kings in a two-year deal in November 2011, was named in the Kings squad for the 2013 Super Rugby season.

However, he is now excited about teaming up again with Solomons and defence coach Omar Mouneimne.

"I have a very good relationship with Alan Solomons and Omar Mouneimne, who've had a huge influence on my career and in my joining the club," said the forward.

"They believe in me, and I believe in their systems and what they want to achieve.

"The decision to move was an easy one to make, especially when you look at the quality competitions that the club plays in week in, week out, taking on some of the best players in the world, all over Europe."