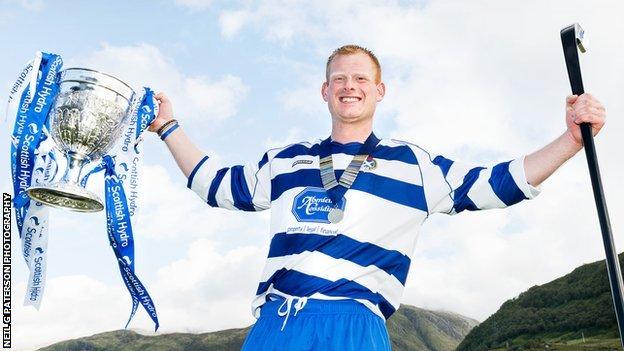 'More captain Jamie Robinson scored against the run of play after 15 minutes with a low drive.

Glen Mackintosh blasted in the second shortly after the restart, then Danny MacRae's expertly-struck lob ended hopes of a Kyles recovery.

Robinson's efforts and bravery throughout earned him the Albert Smith Medal for man of the match.

After the match, Robinson found difficulty expressing how much the victory meant to him and the Newtonmore players, but admitted that it had fulfilled a lifelong ambition of his to hold aloft the 117-year-old trophy.

To win it with the club I've supported and played for all my life, then cap it off with man of the match is incredible

"I've dreamt of this," said Robinson. "I've played it over in my head for years since I was a boy.

"To win it with the club I've supported and played for all my life, then cap it off with man of the match is incredible."

Newtonmore manager PJ Mackintosh hailed the hard work of his players, suggesting there had been enormous pressure on them to atone for their recent defeat against Kyles in this year's Macaulay Cup Final.

"This is fantastic," said Mackintosh. "It's a huge weight of expectation on the whole village, but to step over the line and win it is fantastic.

"Kyles were always dangerous on the break, but we defended really well, and I think we deserved it."