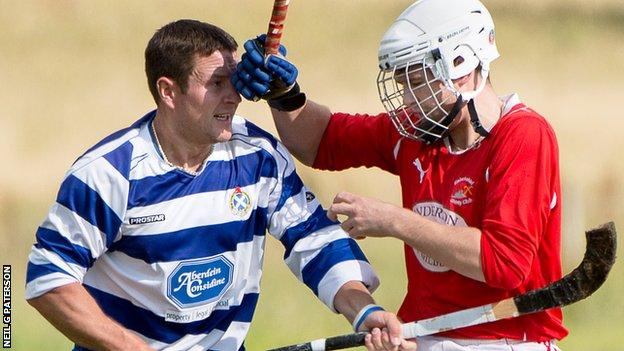 More had to travel to Balmacara to pick up their decisive two points, with a 3-1 win over the Kinlochshiel side.

But they did not want to be presented with the league title trophy ahead of this weekend's Camanachd Cup final and kept the Champagne on ice for another day.

A single goal for Fort William from Bryan Simpson confirmed Oban Camanachd as the first Premiership club to be relegated this season.

Fort themselves need to pick up two wins from there last two games if they don't wish to join Camanachd in National Division 1 next year.

Meanwhile, Lee Bain scored a 90th-minute winner for Kingussie over Inveraray at the Dell to win 3-2.

Inveraray's Garry MacPherson had only just levelled the game one-minute before Bain's winner.

Looking ahead to this weekend action, it's all about one thing: the Camanachd Cup.

This is Shinty's showpiece final and live on BBC TWO at 1415 BST, Kyles Athletic take on Newtonmore at An Aird, Fort William.

This is the competition every shinty player wants to win and to display the Camanachd Cup in your club cabinet at the end of the season is what every single player and club dreams of.

Newtonmore will be looking for revenge after Kyles beat them 4-3 in the Macaulay Cup final just four weeks ago.

However, Kyles are one of the very few teams that have beaten More this year and they're looking to retain the trophy once more then take it South for Tighnabruaich.

This, without question, will be Hell-for-leather from the off as both will try to sneak an early goal and make use of the pre-match nerves.

Both clubs have outstanding forward lines and we should see two very busy keepers at each end.

Myself, alongside Hugh Dan MacLennan, will have the bird's eye view from the BBC commentary box and we'll be hoping for another Camanachd classic.

The last four finals in particular have been unbelievable and full of goals and drama. Fingers crossed, we're in for another historic final.

The night before the final, the aforementioned Mr MacLennan and myself join up in a show at Fort Williams Nevis Centre called 'Shinty's Heroes' as part of the Blas Festival.

The show, which features music and visuals, starts right at the beginning of our sport in the late 1800s and travels through until present day, with a large focus on the men who left their Highland shinty villages to fight in the Great War.

I think Hugh Dan himself fought in the First World War, but he can't quiet remember all the details about it now!

The Camanachd Association has also launched an appeal to find a few missing Camanachd winners' photos that date back to the start of the competition.

If you have any old shinty pictures in your home - in your loft, your shed, or wherever you like to keep things - you may have the very pictures needed to complete the set, so please have a look.

As part of the show, I was very fortunate to be given the Camanachd Association's first-ever rules printed in 1894.

I was also given the 'Strathglass Rules' book that predates the Camanachd Association to the 1850s, which I'm not sure many - if any - will have ever been seen in public.

I'll leave you with the last words in the 'Strathglass Rules' book, which made me laugh:

"The noisy and confused side is almost sure to lose.

"The side that runs most is almost sure to lose.

"The steady, cool and silent side nearly always wins.

"The best and greatest thing to learn at the play is to pass the ball to your friend at the right time."

Safe travels to both clubs and supporters heading to Lochaber for the big day.