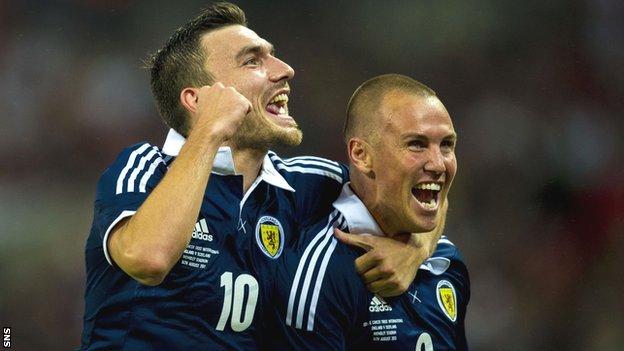 Midfielder Robert Snodgrass has insisted Scotland can cope without striker Kenny Miller ahead of the World Cup qualifier against Belgium.

Miller, 33, retired from international football after scoring his 18th goal during

But Snodgrass is sure Leigh Griffiths, Jamie Mackie, Ross McCormack, Steven Naismith and Jordan Rhodes can trouble the group leaders on Friday.

"Whoever gets their chance, there's no doubt these boys can finish," he said.

You take the belief and the no-fear factor and Scotland have a good chance, especially in front of a packed house at Hampden

"Jordan Rhodes's record speaks for itself. I've seen Leigh Griffiths do it since he was 16 and Steven Fletcher's record in the Premier League is unbelievable.

"Ross McCormack is one of the best players I've played with [and there's] Jamie Mackie."

"We've got loads of players who can score goals but the manager will be saying: 'Can we get the service to these boys to see their finishing ability?'"

Belgium have conceded only two goals in seven Group A matches, and with six wins and a draw Marc Wilmots's team sit three points clear of Croatia, their only rivals for automatic qualification for the Brazil finals.

Snodgrass, who revealed he received messages of thanks on Twitter from Belgium fans for , expects a tough game at Hampden.

However, he insisted the players will not be overawed by a team featuring Chelsea's Eden Hazard, Aston Villa's Christian Benteke and Marouane Fellaini, now with Manchester United.

"You can get a team of superstars but they don't produce on the night, like Croatia, because you don't let them," the 25-year-old said. "We'll give them respect but show no fear.

"When you see your team-mates playing at a top level then you get belief, but when you meet up as a team and you are getting results that's where the true belief comes from.

"You take the belief and the no-fear factor and Scotland have a good chance, especially in front of a packed house at Hampden."

Scotland have lost four of their seven Group A games and are out of the qualification race.