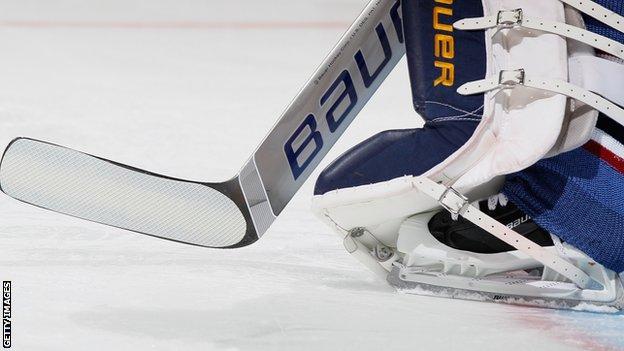 The Glasgow side won the Aladdin Cup after beating French side Gothiques Amiens 5-2 on Saturday, then edged Elite League champions Nottingham Panthers on penalty shots on Sunday.

Finnerty, who replaced Paul Gardner in the summer, was delighted with the performances but knows the real stuff begins this weekend.

"I think those are the best exhibition games I've been a part of," he said. "I know they can be a testimonial sometimes, but for work rate and will to win, I thought the guys enjoyed it.

"Beating Nottingham Panthers, who won a triple crown last year, to win a cup was good, but it will count for nothing by the time we play Dundee Stars in the league opener next week.

"We've got a good group of guys working for us this season and are enjoying the buzz. They can't wait until the next game."

Their win on Saturday - including doubles from Nathan Moon and Ash Goldie and one from Joel Champagne - show they have the capacity to finish teams off as well.

Jonathan Weaver's opener for Panthers was cancelled out by Moon, then Jon Boxill's goal was equalised by Ed McGrane early in the second period.

The visitors started to gain the upper hand as Chris Capraro and Matt Francis found the net to put Nottingham 4-2 ahead.

Clan didn't lie down though as Julien Corriveau and McGrane tied the game, with Goldie finishing the decisive penalty shot to clinch the Aladdin Cup.

Elsewhere, a double-header of 'friendlies' between great rivals Dundee Stars and Fife Flyers ended with the Tayside men gaining an upper hand.

Although losing 4-3 on Saturday at home, Matt Reber got Fife Flyers off to a good start as Todd Dutiaume's men took an early lead on Tayside.

But the Stars pulled things back when Brock McPherson, followed by second period strikes from Tyson Dowzak and Sam McCluskey put them 3-1 ahead.

Steven Gunn grabbed another for the Flyers, but Nico Sacchetti, Jeff Pollastrone, Vince Connon and Rory Rawlyk all ensured a comfortable win for Hutchins' team.

The Stars' coach didn't seem overly happy at how his team performed though, despite two excellent victories.

He said: "I saw some things I liked and some I didn't, but while I'm happy with the wins, we still have some sharpening up to do."

Edinburgh Capitals suffered heartache as they blew a 4-1 lead to Hull Stingrays to go down on penalty shots after a 4-4 draw.

Peter Holecko, Jay King and a Curtis Leinweber double looked to have the Caps on easy street, but Sylvain Cloutier's last gasp equaliser soured the mood in the last minute.

The Murrayfield men were eventually undone when Jereme Tendler scored the decisive penalty shot as Hull snatched a win in Scotland's capital.