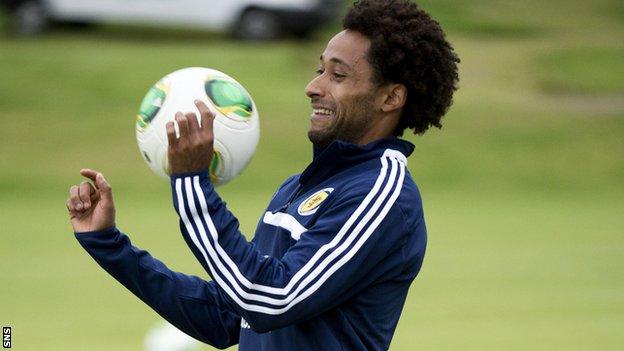 Ikechi Anya is confident he can make the "massive" step up from the English Championship to international football with Scotland.

The Watford wing-back could make his debut in Friday's World Cup qualifier against Belgium at Hampden.

"I've come on in leaps and bounds under the tutelage of the Watford management," Anya said.

"I'm surrounded day in, day out by Premiership-class players. I'm hoping to take my form to Scotland's set-up."

Anya, born in Glasgow of a Nigerian father and Romanian mother, grew up in Castlemilk before moving to England as a seven-year-old with his parents.

He began his senior career with Wycombe Wanderers but in 2008 joined the Glenn Hoddle Academy, established by the former England midfielder to resurrect playing careers.

"It's kind of funny actually, at breakfast one day Mr Zola pulled me aside and said he'd been in touch with Gordon Strachan and that he was going to include me in the list for the Belgium and Macedonia game. I was chuffed to bits. I had our goalkeeper to the side of me and he gave me a pat on the back and the usual football banter."

Between 2009 and 2012, he embarked on a Spanish adventure that took him to Sevilla, Atletico, Celta Vigo, Granada and Cadiz.

And after a loan spell at Watford, the 25-year-old signed permanently for Gianfranco Zola's side this summer.

"I'm a positive player; I've got pace and I like to think I can take on my man and deliver," said Anya. "That's what I'm trying to work on at Watford - the delivery and end-product.

"That's the cliché with quick players like myself; they can beat their man but can they make the right decision at the end? I think that's what I've really improved on and, hopefully, I can do it at this level."

Scotland can no longer qualify for the 2014 World Cup in Brazil but are aiming to finish Group A in impressive fashion after an encouraging away win against Croatia.

Anya revealed that Scotland manager Gordon Strachan had considered giving him a place in the squad to face England in August's friendly at Wembley.

That failed to materialise, but now he has received the call-up, Anya is eager to take his chance of game-time if it comes.

"The gaffer will see me in training, if he thinks I'm good enough he'll put me in and if not I'll bide my time," he said.

"All I can do is be confident in what I'm doing at the Championship level will stand me in good stead here.

"There's no pressure so hopefully we can play free-flowing football. If there had been a chance of qualifying I might've been a bit more nervous.

"But now I feel comfortable. I can go and express myself without the fear of not being successful."