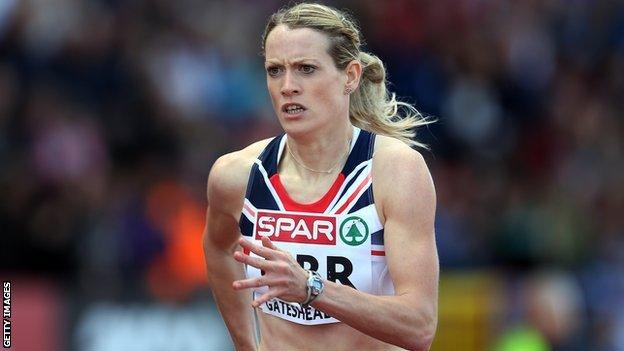 Eilidh Child is confident she can further reduce her personal best time this season.

The 26-year-old broke her own Scottish record in winning the 400m hurdles at the European Team Championships.

A top-two finish in the upcoming British trials will secure Child a place at the World Championships.

She said: "I'm hoping to keep working away in training and then, when it comes to the World Championships, I can knock a little bit more off that time."

Child, who was also part of the Great Britain 4x400m relay team that won at the European Team Championships in Gateshead, added: "I knew it was going to be a good race at the weekend.

"I just wanted to go out and give a good performance because it was a team event at the weekend, not just an individual race for me. To come away with the win was great but also to get a new PB, I'm delighted. I didn't actually expect it because the weather wasn't that great, so I'm really happy.

"This year I have the belief in myself that I can go out there and perform well. It makes a huge difference."

Child also believes Scotland could win a medal in the 4x400m relay at next year's Commonwealth Games in Glasgow, with Lee McConnell, Kirsten McAlsan and Lynsey Sharp the other candidates to make the team.

"There's definitely a lot more depth," she added. "I think we've got a good chance.

"I think we can put in a stronger performance than we did out there. Hopefully, come next year, everyone's fit and healthy.

"With a home crowd behind us, there's no reason why we can't be up there contending for a medal in the 4x400m."