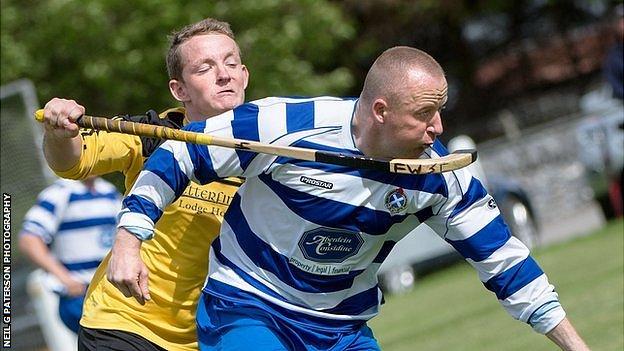 Lochaber Camanachd shocked the Premiership with their first win of the 2013 season to leapfrog Fort William into eighth place and put one foot outside of the relegation zone.

This will be a huge boost to the Spean Bridge club who, through various circumstances, have lost two managers this season but now have a 100% win record under new boss Robert Johnston.

Elsewhere in the Premiership, Lovat's title race took a stutter with a goalless draw at home against Inveraray, while a late strike from Bradley Dixon confirmed both points for Glenurquhart in a 3-1 win over Kinlochshiel.

A Lee Bain double sandwiched between goals from James MacLean and Ronald Ross wrapped up both points for Kingussie over Oban Camanachd, who managed just one in reply from Gavin Stobbart.

Fort William set off to the Eilean for their MacAulay Cup quarter-final tie against Newtonmore.

With one of the strongest teams we have managed to assemble this season, Fort on paper looked in good shape. However, having only played one game in five weeks, Newtonmore did not wait for Fort's rust to rub off!

In under a minute Danny Macrae had found the net, shortly followed by Fraser Macintosh.

Newtonmore looked slick, sharp, and passed the ball around with ease, finding blue and white jerseys with every stroke. Fort William were getting taught a lesson on how to play shinty.

The net was further breached by Rory Kennedy, a further goal from Macrae and a hat-trick from Glen Macintosh. At 5-0, Euan Campbell had pounced to bring the deficit back to four but an unfortunate own goal from Mark Grant contributed to Newtonmore's eventual 8-1 win.

Going out of this competition was no great surprise to the club as it looks to rebuild, however the manner in which Fort were torn apart will be a worry to managers Adi Robertson and Victor Smith.

Although this was a cup game, Fort William now sit in the relegation bottom two of the Premiership after Lochaber's league win on Saturday. However with three games in hand over the Spean club, Fort are under no illusion that the time has come to raise their game, and desire, if they wish to stay in shinty's top flight.

It feels completely insane for me to talk about Fort William and relegation in the same sentence, however that's the reality at this stage in the season for us.

The club is fortunate however to have a number of internationals and outstanding young players involved with the club. We just need to regain a bit of belief, consistency and again remember what it's like to win a big match. I believe we can do this.

Looking ahead to this weekend's fixtures, it's cup final day in the south!

The Celtic Society Cup will be contested between the south's big two, Inveraray and Kyles Athletic. Both are missing key players through injury and suspension but neither club will worry about who is missing when the ball is thrown up at 16:00 BST in Strachur.

In the Premiership, Lochaber look for two wins out of two when they host Kingussie at Spean Bridge, while Newtonmore tackle nearest challengers Lovat at the Eilean.

An uphill challenge not unlike the field itself, Fort will regroup this week and look to bounce back with no less than two points away from home. Kinlochshiel however are extremely nifty on their home turf, and know exactly how to play the off-set field, while occasionally using the power line that runs overhead to great effect.

Fingers crossed however it's Fort that are electrifying on Saturday, and not electrified!