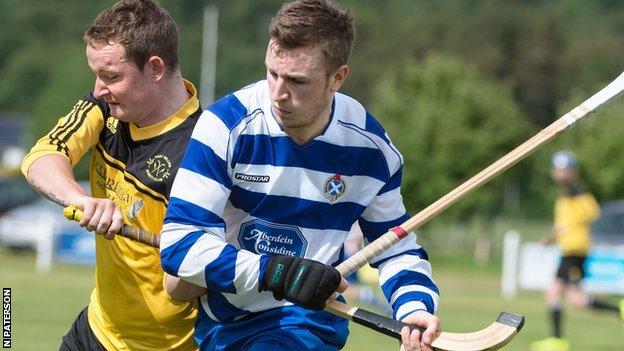 Newtonmore reached the MacAulay Cup semi-finals with an 8-1 eclipse of Fort William, while staying top of the league as Lovat and Inveraray drew.

Lochaber moved out of the relegation zone, coming from behind for a 2-1 home win over Camanachd Cup holders Kyles.

Kingussie leapfrogged Inveraray into third place when they defeated bottom side Oban Camanachd 4-1 at The Dell.

Glenurquhart moved into the top half of the table with a 3-1 home win over Kinlochshiel.

When Roddy MacDonald put Kyles ahead at Spean Bridge, the predictable looked set to happen - until a second-half Zands Ferguson double gave Lochaber both points and lifted them into eighth in the table.

At the top end of the league, Lovat and Inveraray produced a goalless draw at Kiltarlity, which still leaves Lovat two points adrift of leaders and champions Newtonmore.

At The Dell the losing side again scored first when Gavin Stobbart opened for Camanachd.

But Ronald Ross soon replied for Kingussie, before goals from Lee Bain either side of James MacLean strike swung it Kingussie's way.

The other Premiership match was a 3-1 victory for Glenurquhart over Kinochshiel at Drumnadrochit.

Fraser Heath and Neale Reid put Glen two up before Duncan Ach MacRae and Bradley Dickson scored late on for the home side.

Newtonmore crushed Fort William 8-1 at the Eilan in the MacAulay Cup and now meet Lovat in the North semi final.

A hat-trick from Glen MacKintosh and a Danny MacRae brace were coupled with one each from Fraser MacKintosh and Rory Kennedy before an own goal finished it off.

Bute are through to the final of the Balliemore Cup following a 5-3 win over Strathglass at Ballachulish.

Strathglass were 3-2 up but Robert Walker increased his tally from one to four to turn the tie the way of the island club.

Bute will meet Kilmallie or Beauly in the final

Kilmallie are back top of North Division 1 on goal difference after a 5-0 win on Skye which included a Grant MacKenzie hat-trick.

This puts Lochside, who are Oban Camanachd's reserves, into a position to challenge for a place in next season's restored National Division 1.

However, if Camanachd, who are now two points adrift of safety in the Premiership, were to be relegated to National 1, Rovers would have to make do with a place in a regional league.