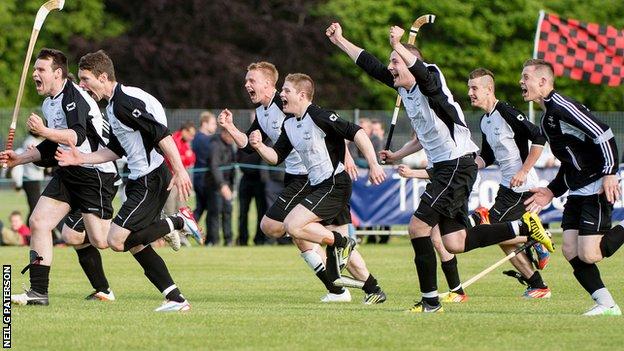 After a 60-year wait for MacTavish Cup success in Kiltarlity, Lovat finally brought home the silverware after a thrilling penalty shoot-out.

It was the first piece of silverware up for grabs this season and a cracking final didn't disappoint.

Adding to the drama, Glenurquhart had never lifted the trophy, nor had the local rivals ever met in a senior cup final.

At the Bught Parks, Inverness, under glorious sunshine, The battle for the 115-year-old trophy, first won by Skye in 1898, got underway.

Glenurquhart found the net first through Fraser Heath, which took the Drumnadrochit men into half-time with the narrowest of margins.

Lovat substitute, Graeme MacMillan then made his presence known as he pounced at the edge of the box to equalise.

The game raced from end-to-end with the Stuarts between the posts kept busy.

Stuart MacIntosh and Stuart MacDonald in the respective goals pulled off a sequence of incredible saves to keep the score level and set up a period of extra-time.

Both men stood up further during the dreaded shoot-out, but it was MacDonald between the Lovat sticks that came out on top, saving three out of four penalties.

The victory will be a huge boost to Lovat who have reinvented themselves as the team to beat this season.

This may be the first time on the podium for Calum Maclean's troops, but I have a feeling it won't be the last.

Midweek, it was a 75-year former Fort William shinty physiotherapist that was hitting the headlines with a song called "The Shinty Referee".

Legendary musician Fergie MacDonald from Acharacle wrote and recorded it in March this year and I was fortunate enough to contribute.

Fergie's tongue-in-cheek ditty is about the trials and tribulations of being a shinty referee, funnily enough, and highlights the hard work and mess that they often have to clean up.

Fergie's song quickly topped the iTunes World Music charts for four days, eventually finishing fourth on Sunday's official count. It's a great song from a gentleman who without doubt has helped raise the profile of our sport.

You can check it out here - The Shinty Referee.