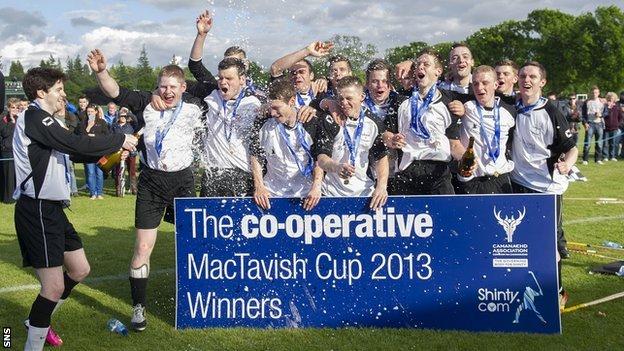 Three penalty shoot-out saves from Lovat keeper Stuart MacDonald against Glenurquhart brought the MacTavish Cup back to the village of Kiltarlity for the first time in 60 years.

The two sides were deadlocked at 1-1 after 120 minutes at Bught Park, with Fraser Heath's opener for Glen cancelled out by Graeme MacMillan in the second half.

The first major showpiece of the season was somewhat unusual with no Lochaber or Badenoch presence.

After no winner could be found in extra-time, the game progressed to penalties and the first of MacDonald's saves was from his opposite number, Stuart MacKintosh.

And, once Kevin Bartlett had put Lovat 2-0 up, there was no way back for the Drumnadrochit side who were denied their first ever win in this competition.

Pre-match favourites Lovat secure their first major trophy since 1953, when they completed a clean sweep of all the game's major titles.

And three of the four surviving members of that Lovat side of six decades ago were among the guests of honour at the Inverness final.

Elsewhere, Newtonmore extended their lead in the Premiership to three points with a 4-0 away win over Lochaber on Friday night before Kingussie beat Kinlochshiel 2-1 to go fourth.

Danny MacRae and Fraser MacKintosh both produced doubles in 'More's victory while Rory MacGregor and Thomas Borthwick put Kingussie two up in advance of John MacRae's response for Shiel.

The Oban challenge evaporated from the MacAulay Cup as Celtic lost 6-1 to Inveraray and Camanachd went out 4-3 to Kyles.

Lewis MacNicol and Peter Macintyre got two each for holders Inveraray. However, it took a bit longer to confirm that there would be no home presence in the south semi-final with Roddy MacDonald's extra-time goal consigning Camanachd to defeat.