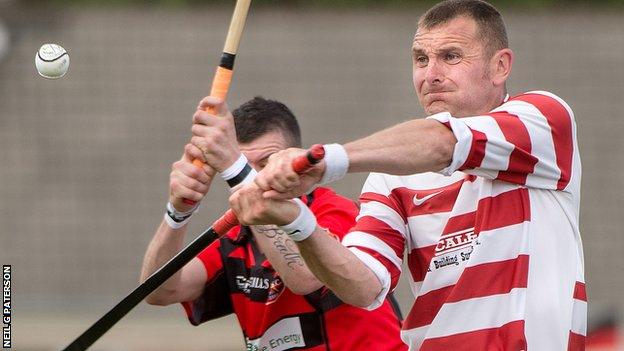 On a weekend when many managers have a longstanding dread of players disappearing to the Rock Ness music festival, shinty's "headline act" was Newtonmore who are back top of the Orion Premiership with a 3-1 home win over Inveraray.

And with the competitions as diverse as the acts at the festival itself, Caberfeidh and Glenurquhart progressed to the last eight of the Scottish Hydro Camanachd Cup, Lovat won through to the semi finals of the Artemis MacAulay Cup and Kilmallie returned to the top of Marine Harvest North Division 1.

Scott Chisholm opened for Newtonmore in the latest instalment of their bid to retain the Premiership title and Lewis MacNicol equalised before Danny MacRae in the second half matched last Saturday's contribution of a double to send More a point clear of Lovat, and with a game in hand.

Newtonmore's opponents in the quarter finals of the Scottish Hydro Camanachd Cup on 6 July will be North Division 1 side Caberfeidh who beat South counterparts Glenorchy 3-1 with goals from Jodi Gorski, Ali MacLennan and David Mellis.

And it's going to be a Great Glen derby not a Lochaber derby against Fort William in one further quarter final.

Lochaber headed for Drumnadrochit for their second round replay with Glenurquhart knowing that victory would set them up against local rivals Fort in the last eight.

However, the honours went to Glenurquhart with a 3-1 win at Blairbeg Park. Ben Delaney struck first for the visitors but Glen stormed back through Ewan Brady, Fraser Heath and Euan Lloyd.

Lovat progress to the semi finals of the Artemis MacAulay Cup with a 3-1 away win over Kinlochshiel.

Lovat's unbeaten record for the season came to an end at 13 games the previous weekend but after a goalless first 45 Lorne MacKay opened for the Kiltarliy team and Finlay MacRae replied for Shiel with a penalty before a matchwinning double, including a penalty, from Greg Matheson.

Kilmallie are back top of Marine Harvest North Division 1 with an 8-1 eclipse of Strathglass. They lead Beauly on goal difference, both treams having played nine games. Similarly Lochside Rovers only trail Aberdour on goal difference in South Division 1, again with nine games played, after a 5-1 away defeat of their title rivals.

Beauly and Bute both grabbed semi final places in the Balliemore Cup with home wins - 5-1 over Glasgow Mid Argyll and 3-1 against Strachur, respectively.