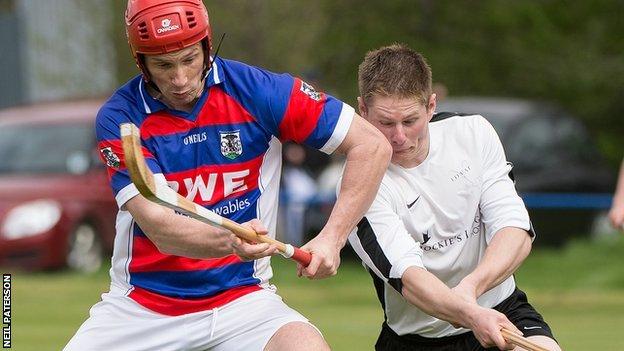 Scottish Hydro Camanachd Cup holders Kyles Athletic won through to Monday's quarter-final draw after a 1-0 win over Inveraray at Tighnabruaich.

Newtonmore overwhelmed minnows Strachur 9-0 while, among other recent winners, Kingussie brought Lovat's run of good form to an end with a 3-0 win.

And Beauly were the only giant-killers of the round as they eliminated Oban Camanachd.

Roberto Zavaroni clinched it for Kyles after 36 minutes to put them into Monday's midday draw at the Commando Memorial at Spean Bridge. The match was a repeat of last year's final, which Kyles also won by a single goal - 6-5.

Beauly were the only lower-league team to progress, although Caberfeidh and Glenorchy do not play until next Saturday.

However, Beauly are top of Marine Harvest North Division 1 while Camanachd currently prop up the Premiership. Sean Stewart got an early breakthrough before Jack MacDonald put it in the bag with a second-half penalty.

The highest score of the round predictably came from Orion Premiership champions Newtonmore with their nine-goal demolition of Strachur who have the biggest goal deficit in South Division 1.

It was 6-0 before Glen MacIntosh even started on his hat-trick, with earlier contributions from Calum Stewart and Danny MacRae, who both got doubles, Scott Chisholm and Fraser MacKintosh.

There was, therefore, no repeat of Strachur's famous giant-killing act of 30 years ago when they put More out 2-0 in the semi-finals.

Lovat, undefeated in all 13 previous league and cup games, went out 3-0 at Kingussie, whose scorers were Thomas Borthwick in the first minute, Lee Bain and Ronald Ross, who made his return to the side.

Fort William made swift work of Glasgow Mid Argyll from South Division 1. Their 4-1 victory was secured by a double from Daniel Stewart and one each from Gary Innes and Duncan Rodger, with Ryan Harrison replying at 3-0.

Skye scored first at home to Kinlochshiel through Jordan Murchison but there was no shock from the lower-league side.

Two goals from Gordie MacDonald soon put Shiel 2-1 up and Duncan Ach MacRae and John MacRae extended that to 4-1 before Murchison pulled one back. Keith MacRae got Shiel's fifth before John MacRae completed his double and MacDonald his hat-trick in the final minute for a 7-2 win.

The only replay will be between Lochaber and Glenurquhart following a 3-3 draw in Spean. Glen had Ewan Brady's and Neale Reid's goals neutralised by Zands Ferguson and Stuart Callison before Ferguson put Lochaber ahead for the first time in advance of Brady's late equaliser.

Oban Celtic progressed to the quarter-final of the Artemis MacAulay Cup 4-0 at home to Taynuilt while Kilmallie reduced Beauly's lead in North Division 1 to two points with a 5-0 victory in Inverness in the first of their two games in hand.

Glenorchy and Bute moved into second and third places in South Division 1 with a 1-0 win over Lochside Rovers and an 8-3 defeat of Kilmory respectively.