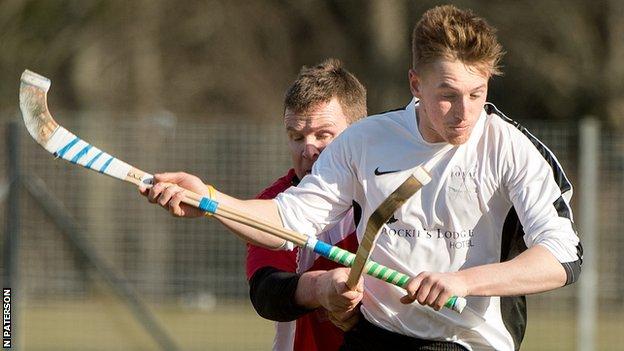 It was a tough Saturday at the office for managers Adam Robertson and Victor Smith as Fort William met Newtonmore in the opening round of the MacTavish Cup.

In the beautiful sunshine a large crowd had gathered around the Eilean for what was set to be a cracker, and a cracker they got.

Fort were first out of the starting blocks and found the net in under four minutes with a goal that Duncan Rodgers has been credited for.

However, I'm throwing my hat in the ring and saying I hit it last.

To be fair, Newtonmore defender Norman Campbell has more claim to it than anyone as his calf played its part in diverting the ball past Ritchie.

Fort were looking sharp, and it wasn't long before the second goal came.

A Rodgers shot, saved by Ritchie, popped up into the air and I managed to knock it past the Newtonmore keeper for a two-goal cushion.

But, midway throughout the first half, the wheels started to come off the Fort cart, firstly with the loss of captain Liam Macintyre.

Fort now face their Premiership fixture against Glenurquhart this weekend with eight out of the starting 12 unavailable.

Liam had taken a clatter and broken his hand in two places, and Gordie MacKinnon was next on the A&E list with exactly the same injury at the other end of the park.

With the game raging from end to end More's John MacKenzie unleashed an unstoppable shot with seconds of the first half remaining to bring the deficit back to one.

After regrouping Fort were once more ahead by two after I hit a corner from youngster Jack Fraser past Ritchie.

This knocked the wind out of the Newtonmore sails for ten minutes before they rallied and unleashed wave after wave of attacks.

Fort William's defence could only hang on for so long, before a penalty was awarded and Danny McRae brought the game back to 3-2.

Macrae had another chance moments later from the spot, but Paul MacKay saved well to keep Fort in front.

With seconds remaining, and the Fort William defence stretched to the limit, John Mackenzie scoed the equaliser to take the tie to extra time.

This was a killer blow to Fort who had also lost full centre Stevie Stewart to a hamstring injury, and Sean Cameron to a broken foot!

With very little options left in the Fort squad, Macrae and Fraser Macintosh calmly pushed the Badenoch boys through to the next round where they meet Kingussie.

Fort now face their Premiership fixture against Glenurquhart this weekend with eight out of the starting 12 unavailable.

This is a huge blow to the club, who had just managed to get players back.

However, Raigmore hospital in Inverness have three players getting pins fitted this week - good news if you have shares in steel.

Kingussie narrowly scraped through after beating Skye on penalties on the island, with Lovat, Beauly, and Kinlochshiel also winning their fixtures to progress through to the next round.

In the Celtic Society Cup, Aberdour, Glenorchy, and Glasgow Mid-Argyll all won their opening round ties.

In the Premiership, Glenurquhart got their first points on the board with a 2-1 win over Oban Camanachd.

Inveraray sit top of the Premiership after a 3-1 home win over Kyles.

Lewis MacNicol, Peter Macintyre, and Garry Macpherson were all on song for 'Aray, while Thomas Whyte gave the Tighnabruiach men a consolation goal.

As I previously mentioned, Fort travel to Glenurquhart with the most depleted team in the clubs history, through injury, work, suspension, and a stag party which gallops south for the Grand National.

The Fort boys have very sportingly said they can make another 15 seats available on the bus if the Glenurquhart team fancies a week off and we call it a draw?

I think it makes sense. I wouldn't bother with the shinty this week, boys.