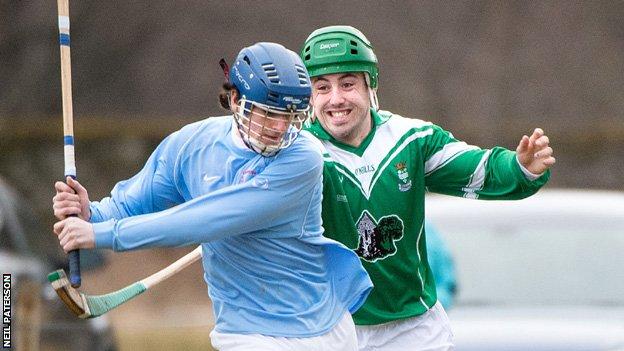 These are still early days in the shinty season but Fort William - that's my team - had better start picking points up soon in the Orion Group Premiership if they are to avoid any kind of relegation battle towards the end of the season.

Fort lost 4-0 to an experienced Kyles Athletic on their home pitch in Tighnabruaich and the defeat leaves them on one point from their first three league games.

Kyles, however, have maximum points and the Argyll men now sit one point clear at the top of the table.

They couldn't have got off to a better start as Fort defender Neil Robertson cleared a ball from the throw-up which ricocheted off Niall MacPhee's head and landed at Roddy MacDonald's feet who calmly slotted home the opening goal in under 30 seconds.

Kyles continued to push forward and came close to doubling their lead on a few occasions throughout the first half.

It's strange to think that Fort William could even be thought of when mentioning relegation, especially after their success and history over the past 10 years

However, the goalkeeping father of Kyles scorer Roddy MacDonald, Kenny, pulled off two outstanding saves to keep the Camanachd champions in the lead going into the break.

The second half started in similar fashion to the first with Kyles scoring very quickly from the throw-up, once more from Roddy MacDonald.

Fort managers Adi Robertson and Victor Smith made some changes which provided Fort with more chances up front.

However, when Fort did hit the target they were met once more by Kenny "Heartbreaker" MacDonald, so called because he has broken more hearts over the years in the Kyles goal than Peter Stringfellow.

At the other end Thomas Whyte and Dunky Kerr pushed Kyles out of sight with a goal a piece to finish the tie comfortably for the hosts.

It's strange to think that Fort William could even be thought of when mentioning relegation, especially after their success and history over the past 10 years.

But the team is inexperienced and having lost 10 players in two years, they have to face up to the possibility.

This squad should be boosted next week by the return of ex-Scotland internationals, Duncan Rodgers, Brian (Boob) Simpson and Chris Bamber.

Also, Euan Campbell, who had previously moved out of the area and played two seasons with Kyles Athletic, will return, thanks to his work commitments taking him back to the Lochaber area.

Glenurquhart are still in search of their first points after Kinlochshiel's Keith MacRae scored in the last minute to snatch victory and both points from the Drumnadrochit club.

Oban Camanachd picked up their first two points of the season with a 3-1 home win over Kingussie, while neighbouring Badenoch boys Newtonmore disposed of Lochaber 5-1 with Danny MacRae netting four.

It looked as though Lovat were going to take their first win of the 2013 season when Greg Matheson scored in the 88th minute to lead Inveraray 2-1 at the Winterton.

'Aray's wing centre David MacPherson had other ideas, though, and deep in stoppage time bagged Inveraray's second of the day to share the points.

Looking ahead to this weekend's fixtures, Kyles Athletic host Newtonmore which should be nothing short of a stonker.

Newtonmore have pipped Kyles at the post for the league title for the past three seasons.

But with Newtonmore dropping a point to Lovat, Kyles will be well aware they have an opportunity to open up an early lead in the title race if they can secure both points at home.

Fort William welcome Oban Camanachd to An Aird. Oban will still be on a high fresh off the back of their win against Kingussie.

I may be tempting fate here but I do have a good feeling about this week...