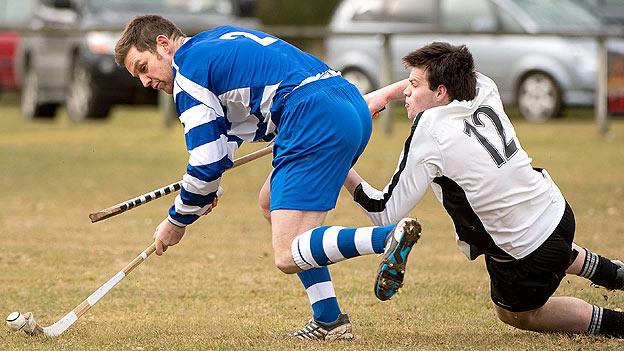 There were Orion Premiership victories for Inveraray, Kingussie and Kyles on a Saturday when the talk on the touchlines was dominated by emerging controversy.

The Camanachd Association board has ruled that next year the league will reduce from 10 to eight teams with the restoration of National Division 1.

But Premiership champions Newtonmore have lodged a motion to the Association's AGM on 26 April that the top league should remain as it stands, while Skye are demanding the complete scrapping of the new format.

However, their role in the row did not prevent Newtonmore from scoring the first Premiership goal of the day against Lovat in the early throw up in Kiltarlity when Fraser MacKintosh found the net after eight minutes.

Calum MacAulay equalised soon after and Greg Matheson put Lovat ahead on half-time.

Newtonmore pressed hard with the help of the wind in the second half and Danny MacRae drew them level. MacKintosh had the ball in the net late on but his effort was belatedly ruled offside and the points were shared.

This allowed Badenoch rivals Kingussie to move ahead of the champions with a 2-0 home win over Lochaber. The game seemed destined to remain goalless until the last five minutes when teenager Thomas Borthwick fired in a quick double.

Inveraray looked on easy street away to Oban Camanachd when Gary MacPherson scored in the first minute, Euan McMurdo in the second and Lewis McNicol made it 3-0 after 10 minutes.

However, Gavin Stobbart struck back in the first half and Iain McMillan in after the interval and it was only McMurdo's late completion of a double which made the final score 4-2.

Roddy MacDonald grabbed the only goal of the game for Kyles away to Glenurquhart to allow the Tighnabruich side to join Inveraray and Kingussie on maximum points after two games.

The other Premiership draw was at An Aird between Fort William and Kinlochshiel.

Finlay MacRae struck first for Shiel but within three minutes of going behind Fort were 2-1 up thanks to Ryan Campbell's quickfire double. MacRae then completed his own double late on to share the points.