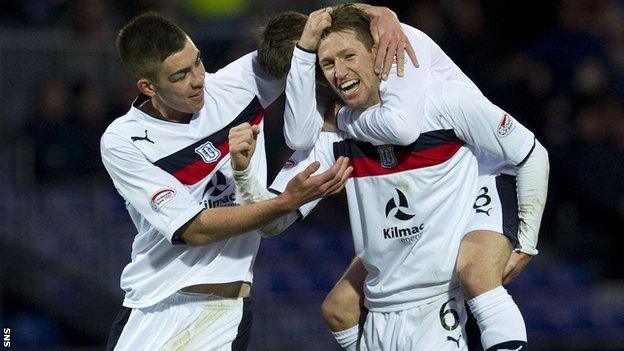 Dundee manager Barry Smith was pleased to take a point in Dingwall against Ross County.

"We're happy, it's a very a difficult place to come up to and a lot of teams have struggled when they've come up here," Smith told BBC Scotland.

"We also know we can do better. We'll never stop believing that we can catch the other teams above us."

Iain Davidson' long-range strike gave the visitors the lead before Gary Glen levelled after the break.

"It's a great finish," said Smith of Davidson's goal. "To be honest, I didn't know Iain had that in his locker but all credit to him for taking the strike and scoring the goal.

"We had created another few chances in the second half and I think if we had scored then, the game gets killed off.

"From our point of view, we probably could do better with the [Gary Glen] goal but, up until then, I thought we played extremely well.

"To go away back down the road with a point, we've got to be content with it."

The Dens Park side return to the Highlands next week to take on Terry Butcher's Inverness.

"It doesn't get any easier," added Smith.

"They're an impressive team, they're on a great run just now and Terry's has got them playing good stuff but we've got to come up and take confidence from our performance here."