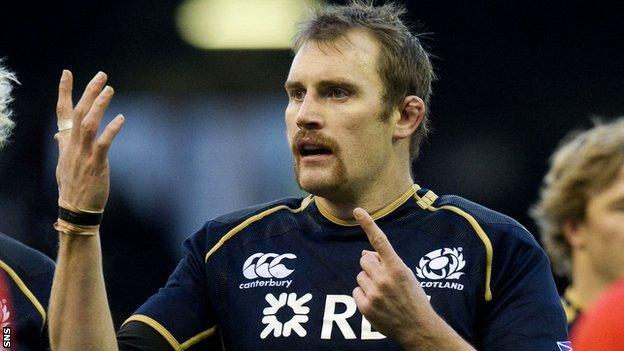 Glasgow captain Al Kellock has leapt to the defence of his Scotland colleagues following criticism in the wake of Andy Robinson's resignation.

Former Scotland and British Lions scrum-half Gary Armstrong suggested that the players in the national squad were more interested in money than playing for their country.

"I totally disagree with what he's saying," said Kellock.

"We are passionate about playing for Scotland."

After Scotland's defeat to Tonga, Armstrong told BBC Scotland that he doubted the commitment of the current crop of players.

"When you're watching the games, I question the commitment of some of the players," Armstrong said.

"The body language of some of the players makes you wonder if they're there for the money or if they're wanting to pull on the Scottish jersey.

"It makes you wonder what they're thinking. Does it hurt them? Because it would certainly hurt me."

Kellock concedes that the performance and result against Tonga were not good enough, but says any suggestion that the players do not care about playing for their country are wide of the mark.

"There's no bigger honour as far as we are concerned than pulling on your national team's jersey," Kellock told BBC Scotland's Sport Nation.

"Gary's a guy who has earned the right to have an opinion because of how he played for Scotland, and the passion he's put into it, but I would rather his opinion was rugby-based.

"He's making comments about whether it hurts me - you should have seen the changing room after the Tonga game and then you would have seen what it meant to the players.

"We have bad games, every team has bad games, but when you look at the good games, Australia away, Fiji, Samoa, and the effort that was put into those games - that Australia game we ran ourselves into the ground.

The Glasgow lock, who made his Test debut versus Australia at Murrayfield in 2004, disputes the theory put forward by Armstrong that amateur players had more passion for the game than professionals.

"It's part of being a rugby player, it has to be. When you are playing for your club or your country, that's the biggest motivating factor you will ever have.

"I'd rather he came into the camp and said it, rather than on a radio show or in the papers."

Robinson resigned after three straight defeats in the Autumn internationals, and Kellock is disappointed to see him go.

He said: "Personally, Andy was fantastic for me, he had a massive influence on my career.

"That Tonga defeat was incredibly disappointing, probably as low as I've felt as a Scotland player.

"On the back of that Andy's ultimately lost his job, but we were on the park, we're the guys who should've done better, who should've won that game."