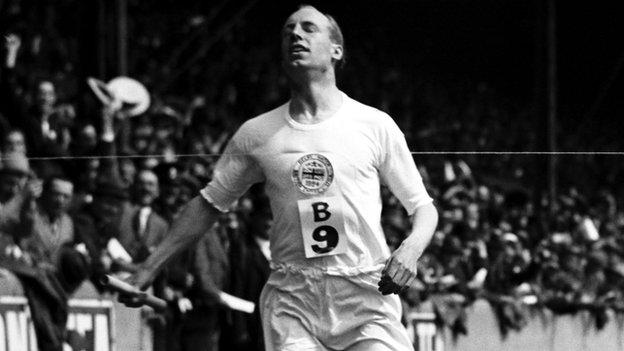 Eric Liddell is famed internationally for the race he didn't run, rather than any he did.

The uplifting manner in which he lived his life, as portrayed in the 1981 film Chariots of Fire, truly marks him as one of the greatest Scottish athletes.

Eric Henry Liddell, in common with many Scottish sporting heroes, was not actually born in the country he was to represent with such distinction.

Born in 1902 in the city of Tientsin (now Tianjin) in north-eastern China, Liddell was the son of missionary parents working for the Church of Scotland.

Liddell was not to live in Scotland until he entered university in 1920, after 12 years at Eltham College boarding school in Bromley, a school for the children of missionaries.

His headmaster at Eltham was to remember Liddell as a boy "entirely without vanity".

Eric joined his elder brother Rob at Edinburgh University to study a BSc in Pure Science.

Test tubes and beakers were never to provide the stimulus that pulled the young Eric in two differing directions: a missionary zeal and an intense talent for sport, both of which were to radically shape the destiny of the young man.

At first, Liddell seemed destined for a career with the oval ball, displaying enough talent at wing three quarter to win seven international rugby caps between 1921 and 1923.

It is interesting to speculate that Liddell could have appeared as a member of the 1925 Scotland Grand Slam-winning side.

His life was to follow a different pattern as, realising there was not time enough for both sports, he chose to concentrate on running - a decision that was to take him to the heights of athletics.

In the early 1920s, Liddell established himself as one of the country's top runners, regularly scooping not only the Scottish 100 and 220-yard sprinting tiles, but also the 440-yard contests.

Liddell was also successful in British competition, winning the shorter sprint distances at the Triangular International Contests in 1921, 1922 and 1923, this competition showcasing athletes from Scotland, England and Ireland.

This success made Liddell a certainty for inclusion in the British Olympic squad which set sail for the 1924 Paris Olympic Games.

Although he was strongly fancied as a contender in the 100m event, he was not destined to race in this, his strongest event.

They that honour me, I will honour.

Due to his religious principles, Liddell refused to run in the 100m heats, which were held on a Sunday.

The Scot elected to run the 400m, a distance in which he was a good performer, but certainly not his forte.

Liddell spent the Sunday of the 100m heats preaching at the Scots Kirk in Paris.

A few days before the 400m final, Liddell had won a bronze medal in the 200m, behind the Americans Jackson Scholz and Charley Paddock.

The Scot had to contend with negative press from some quarters of the British camp, who could not understand his placing God above winning a medal for the King.

On Friday, 11 July 1924, Liddell faced a strong field in the 400m final, particularly from Scholz and the US athetes.

Liddell sportingly shook the hands of each of his competitors and the "Flying Scotsman" set off at a devastating pace.

In one of the most famous scenes from the 1981 film, the now famous quotation from the Book of Samuel, "They that honour me, I will honour" was passed to Liddell.

The Scot not only collected gold by a margin of six metres, but also set a world record of 47.6 seconds in the process.

On the day of the final, Liddell is reported to have accounted for his success by saying, "The secret of my success over the 400m is that I run the first 200m as fast as I can. Then, for the second 200m, with God's help I run faster."

Although many aspects of the film Chariots of Fire were mythologised for creative effect, this should not detract from Liddell's achievement.

To win in a race at a distance which is unfamiliar is no mean feat, to do it to win Olympic gold something else again, and to set a world record in the process raises the feat to the incredible.

After his Olympic triumph Liddell threw himself headlong into missionary work, returning to China in 1925, to Tientsin, where he was ordained a minister in 1932.

He married Florence Mackenzie two years later and the couple went on to have three daughters.

With the Japanese invasion of China in 1937, Eric was now in Siaochang - occupied territory.

In 1941 the British Government advised all British nationals in China to leave.

Liddell remained in China while his family moved to Canada.

In 1943 Liddell was interned by the Japanese authorities in a camp at Weihsien.

Life in the internment camp was brutally hard, according to an account written by fellow missionary Norman Cliff of Liddell and life at Weihsien.

For the first time in his life Liddell indulged in sporting activity on Sundays, refereeing football matches in the camp.

They shall mount up with wings as eagles; they shall run and not be weary

Unfortunately, Liddell was not destined to survive the war.

He suffered a brain tumour shortly before the war's end, and died in the camp.

Upon his death, Liddell's grave was marked by a simple wooden cross, with his name written on it in boot polish.

The site was identified many years later, and Edinburgh University erected a stone of Mull granite in 1991.

The memorial stone bears the inscription, "They shall mount up with wings as eagles; they shall run and not be weary."

The Eric Liddell Centre in the old North Morningside Church at "Holy Corner" in Edinburgh was set up as a continuing memorial to the man, the athlete and his Christian principles.

Another Scottish gold was won in 1924. James Macnabb was 21st chief of Clan Macnab and rowed to gold in the coxless fours.

The influence of Eric Liddell on Scotland's athletes continues.

The winner of the first women's pentathlon at the Sydney Olympic Games in 2000, Steph Cook, cited Liddell as an inspiration in her track career and it was to Liddell that Allan Wells dedicated his 1980 Moscow 100m gold medal.

Find the stories of other Golden Scots via this link.