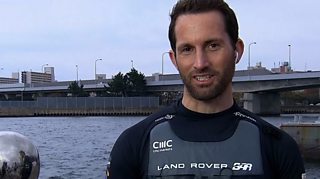 Sir Ben Ainslie says winning the America's Cup World Series with a narrow Fukuoka regatta victory is a "massive day" for his Land Rover BAR team in their quest to become the first British crew to win the America's Cup.

The team earn two points for the next phase, the qualifying series in May and June. The winners of that will face Oracle Team USA in the main event, the 2017 America's Cup later in June.

Watch highlights of the final round of the America's Cup World Series from Japan on Monday 21 November at 20:00 GMT on BBC Red Button, the BBC Sport website & app.

Mourinho made me more 'savvy' - Rashford