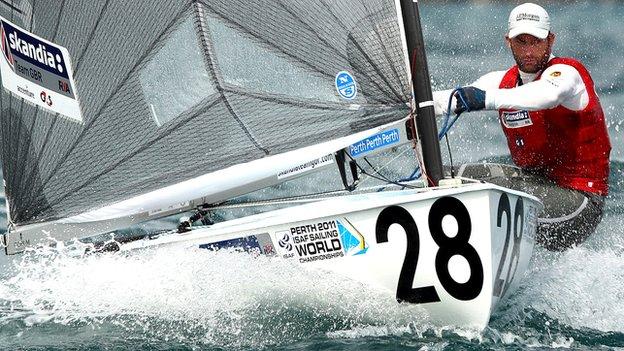 Triple Olympic gold medallist Ben Ainslie extended his lead in the Finn class to 11 points at the halfway stage of the World Cup event in Spain.

Ainslie, competing for the first time since being disqualified for gross misconduct at the World Championships, finished first and second in the two Finn races in Palma.

"I couldn't be happier to be here and to be racing," he said.

Iain Percy and Andrew Simpson went top of the standings in the Star class.

Ainslie, 35, has not raced since December and underwent back surgery in the off season.

He expressed his relief at returning to competition, "considering where I was two months ago".

Percy and Simpson, third overnight in the first World Cup of the European season, took the lead in the two-man Star keelboat standings after 12th and third place finishes from the day's two races.

The Olympic champions are competing for the first time since they were forced out of last year's World Championships when Percy injured his back.

Four more British crews are in silver medal positions in the regatta, including Sophie Ainsworth and Sophie Weguelin in the 470 women's event and Nick Thompson in the Laser.