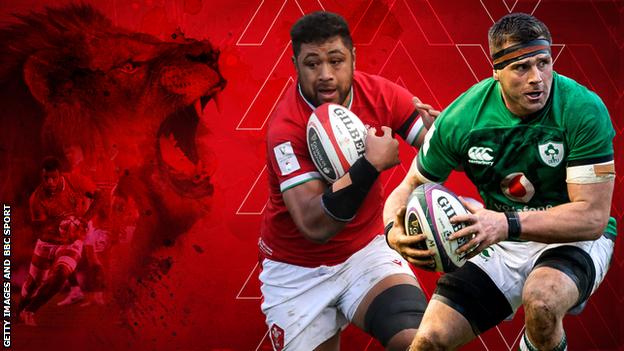 As the Six Nations nears its end, British and Irish Lions head coach Warren Gatland should have a much clearer picture of his squad for this summer's tour.

There is not quite so much clarity on where and when the tour will actually be played, with playing the Springboks at home and postponement still on the table.

Because of the coronavirus pandemic, South Africa have not played since they won the World Cup in November 2019.

Meanwhile, Wales, Ireland and Scotland have been finding form in the Six Nations, with England head coach Eddie Jones saying his side is in "a transition period".

With this in mind, three-time tourist Matt Dawson believes the Lions have an unprecedented opportunity.

"What an unbelievable chance for the Lions if the tour goes ahead," he told BBC Sport.

"Everything is leaning towards the Lions winning. Players on form, playing a style of rugby that could take on anyone in the world.

"Maybe for the first time ever the Lions will go into this as favourites."

There is plenty for Gatland to weigh up, but no need to leave all the work to him. Armed with all we have seen in this year's Six Nations, you can pick your starting Lions XV to face the world champions here.

Pick your starting XV for the first Lions Test in 2021.

First up the most prestigious role of them all: Lions captain.

Although Alun Wyn Jones could not lead Wales to a Grand Slam, the 35-year-old lock continued to display the steely captaincy style that has contributed to his side's success.

That Jones is a man his team want to give their all for was plain to see as Welsh players repeatedly put their bodies on the line against France.

Jones himself led from the front in Wales' defensive efforts, making more tackles than anyone else in his team with 22.

But a loss, even if by only two points, is a loss and it remains to be seen whether France full-back Brice Dulin's late try to claim a 32-30 victory will count against the Welshman.

Scotland's Stuart Hogg is another contender for captain and had a much calmer weekend as he led his side to a 52-10 win against Italy from fly-half.

Hogg's team could still finish second in the tournament if they can claim victory against France in their rearranged game on Friday.

Saturday's defeat against Ireland was a quiet day for Itoje who won one turnover, conceded two and gave away a penalty while only making 3m in four carries.

Farrell was yet again at the centre of a misfiring English attack and his heavy involvement in the side's fifth-place finish may not paint him in a favourable light.

Farrell plays centre for his country, but is also in the race to be the Lions starting fly-half. In Dublin, the 29-year-old was firmly outshone by Johnny Sexton in that area.

As Gatland watched in the stands, Ireland captain Sexton reminded the New Zealander of the importance of a reliable goal-kicker as he claimed 22 of Ireland's 32 points from the tee.

"Johnny Sexton is a big-game player and looks like he has still got it to run the game," Dawson said of the performance.

England's George Ford struggled opposite the Irishman and only played 50 minutes, conceding three turnovers and making two handling errors before he was replaced.

Many would like to see Scotland's Finn Russell offer the Lions some of his mercurial magic, but the Racing 92 playmaker was unable to show his wares at the weekend as he missed the Italy game with concussion.

Wales' Dan Biggar put in a solid performance against France, scoring his side's first try, but it was Sexton who looked like the man most capable of masterminding a win against the Springboks.

He was not the only Irishman to stake his claim for a starting spot as the hosts found their best form of the tournament in victory against England.

Centre Robbie Henshaw was deservedly man of the match after a rampaging performance which contributed to some impressive overall stats.

The 27-year-old has made more carries than any other back in this year's tournament with 63. 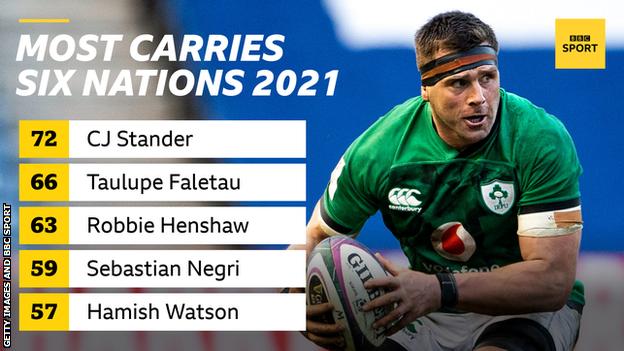 Despite the loss of the Grand Slam, the nation to contribute the most players to Gatland's squad will surely be Wales with the side still on track to win the Six Nations title.

Number eight Taulupe Faletau and centre Jonathan Davies were two of the many players to impress in Paris and wing Louis Rees-Zammit was a popular topic of post-match discussion again.

Rees-Zammit showed composure beyond his 20 years for a spectacular finish in the corner, but the try was not given as the ball was grounded on the base of the flag.

"Back in October I was talking about Louis Rees-Zammit as a Lions starter," Dawson said.

"The way he finished the try that was disallowed... His running lines are good, he is not selfish, he has got great hands and footballing skills.

"He can pop up anywhere and cause havoc." 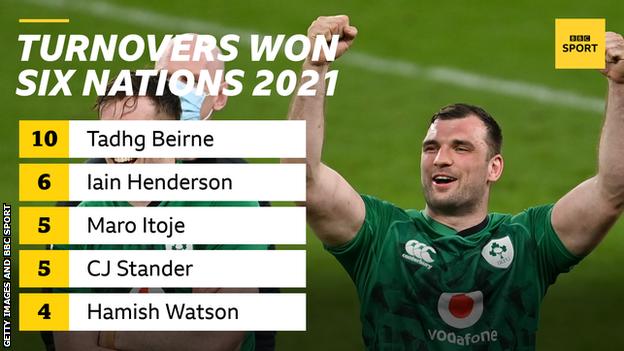 Arguably the most mind-boggling area of selection will be the back row, where Gatland has an abundance of stars.

Watson has made the fifth most carries in the tournament so far with 57. He is also fifth in the table for turnovers won with four and still has a game left to play.

Retiring Ireland flanker CJ Stander went out on a high as he made 35m against England, with only wings Keith Earls (42) and Jacob Stockdale (43) beating him in that department.

Stander has made more carries than anyone else in the tournament so far with 72.

Flying highest in the turnover stakes are Ireland locks Tadhg Beirne and Iain Henderson, with 10 and six respectively.

Alongside Wales' Faletau, try-scorer Josh Navidi put in another eye-catching performance and Justin Tipuric showed he has many tricks up his sleeve with a clever chip in the build-up to Josh Adams' score.

It was not such a happy time for England's World Cup star Tom Curry on Saturday, who conceded four turnovers and two penalties in Dublin.