Ireland face Italy in Rome on Saturday having lost their opening two matches for the first time in Six Nations history.

Head coach Andy Farrell's side have scored a tournament-low two tries in their defeats by Wales and France.

However, Italy are usually ideal fodder to face when a result is needed - it's exactly six years on Sunday since they won a Six Nations match.

The Azzurri have conceded 91 points and 13 tries in their two losses to date.

Ireland make seven changes to the side that lost to France at home two weeks ago.

Captain Johnny Sexton, who this week raised questions about his retirement with a "throwaway comment", returns after a head injury to win his 97th cap but fellow half-back Conor Murray has not recovered from his hamstring issue.

Dave Kilcoyne, Ronan Kelleher and Tadhg Furlong come off the replacements bench to make up an entirely new front row.

Elsewhere in the pack, James Ryan and Will Connors replace Rhys Ruddock and Josh van der Flier, while Tadhg Beirne switches to the back row.

Italy are unchanged from the side that lost to England.

Andrew Cotter: The two teams without a win in this year's Six Nations but there the similarities end. Ireland will start as strong favourites and will also have the steadying figure of Johnny Sexton returning at fly-half in an all-Leinster back-line.

It's a chance for Andy Farrell to have a look at some different combinations so there's an all-new front row, while Connors comes in at open-side flanker.

Italy coach Franco Smith has gone for the same 15 which started against England - partly because his options are more limited and also because there were some signs of life in the display at Twickenham.

But encouraging glimpses are all the Azzurri have at the moment and it will require something of a miracle at the Stadio Olimpico if they are to avoid a 30th successive defeat in the Six Nations.

View from both camps

Italy head coach Franco Smith: "We've worked a lot on ourselves, focusing on our game plan. We aim to show the same attitude as in the last match with the aim of taking another step forward."

Ireland head coach Andy Farrell on Sexton's future: "As long as Johnny keeps on giving to Irish rugby, he'll keep putting his foot forward to be in the equation.

"He feels good at this moment in time, his appetite is as strong as ever, he's certainly one of those guys who makes the feeling in the group feel right.

"As long as that appetite stays, I'm sure that we'll keep moving in the right direction regarding that." 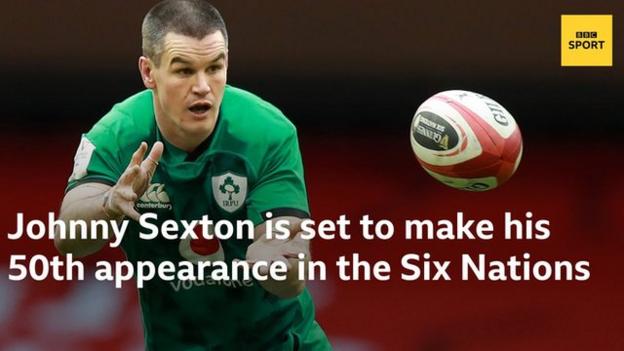