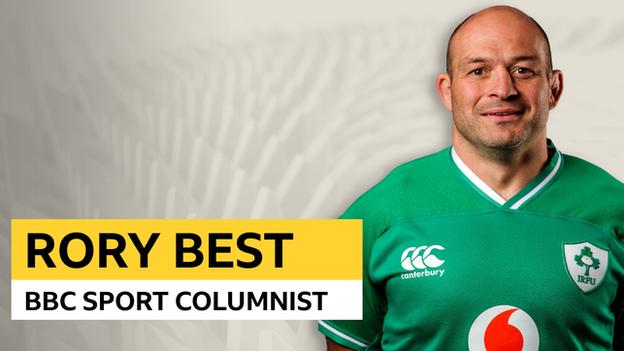 Rugby is at a crossroads, and it has a decision to make.

Do we want to become like American football where we build athletes primed to collide with each other? Or do we want to preserve what rugby should be, which is a blend of technique and power.

In the first two weeks of the Six Nations both Peter O'Mahony and Zander Fagerson were sent off for dangerous clearouts. In both instances the decision was correct.

But why are we seeing an increase in these situations? And, more importantly, how are we going to stop them?

The evolution of highly-tuned athletes has made rugby a better spectator sport in many regards. Players are able to do things now that five or 10 years ago they weren't capable of.

My worry is that in the age of sports science, we may increasingly see technique going out the window.

Pete and Zander should both have taken a split-second before they made impact to sight their target, dip and then clean somebody up and out. Instead they careered into contact, travelling at speed.

There is no way of avoiding colliding heads or shoulders when somebody is low and poached over the ball.

If you make an impact, try to get under him and clean him while keeping your feet - that is technically a very good clean. But if you're 130kg and move like Zander Fagerson, Tadhg Furlong or Kyle Sinckler, who move like how backs used to, and you're hurtling at that speed, for me that is reckless.

There is a safety element, and with that comes the issue of optics.

Kids and parents want assurances that rugby is safe, they want a sport where somebody who is technically a very good tackler is rewarded, while somebody who is reckless is asked to leave the field until they correct their technique.

The future of the game relies on technical teaching and coaching, not getting the biggest possible athletes on the pitch. The goal for the game should be bringing through smart rugby players no matter what their body shape is, and rewarding those who have taken the time to perfect their technique.

As far as reckless play goes, the only way to stop it is to punish it accordingly. Thankfully this can be done, and it has been before.

It's not that long ago that it was ok to basically stamp somebody on the ground because it was deemed as rucking. Then it was outlawed and now we see a lot less of it.

Bigger and stronger does not always mean better. At its heart rugby is a technical sport, and it needs to stay that way.

Ireland a team in transition, not crisis

As for Ireland, two losses from two is not a good look. But I disagree with a lot of criticism questioning the team's direction - you can see where they want to go.

When you look at the way they're trying to evolve their attack they are missing the cutting edge on the flanks, and that's not necessarily the fault of the wings.

I would like to see the back rows hold a bit of width, with one on each flank.

CJ Stander and Josh van der Flier get through a mountain of work but a lot of it is in between the 15s, that's an area that you can let your front five take care of, which allows you to get the forwards that are better athletes to give you more numbers on the edge.

Getting the back rows a channel or two wider would help Ireland with their numbers and we would see the benefits of that, because they are playing a smart game.

They are getting territory, a lot of possession, reasonably quick ball and we are starting to see a bit of evolution.

The more they feel comfortable in that set-up, the more we will see offloads and a flowing attack.

You look at James Lowe's disallowed try, that was really nice, crisp play with balls out the back, options and good passing - that is how they want to play, and they can absolutely get there.

Andy Farrell and his team know how they want to play, and in order to implement that they need the players to be comfortable in that system.

That explained the continuity in selection for the first two games, and it explains why largely the same group of players will take on Italy.

There has been a lot of talk about making changes for Italy, but I maintain that what Ireland need as much as anything is a level of consistency in selection, to really hammer home how they want to play.

Once the style of play is firmly drilled in, then you can makes changes seamlessly because the vast majority of the team understand what is happening.

At the minute the players are still trying to get to grips with what is expected of them and become comfortable with it. You have to stick with your best team.

France can make changes now and they don't suffer because they have confidence and everybody believes in what they are doing. The core senior players know how to move the guys who have just come in around the pitch.

Ireland are not that far away, there are areas for improvement and they are undoubtedly lacking an 'X factor player', but a fully fit Jacob Stockdale or Jordan Larmour could provide that spark. The talent is there for this team to be successful.

Against Italy, where a win is expected, what you want to see from Ireland is a ruthless performance.

It is hard to discount Italy entirely because they are an international team, but there's no doubt they are struggling. You don't know what the circumstances of the game are going to be, but what you can factor in is what you want the attitude to be.

When you watch the best teams, you get a feeling that they are always switched on. Look at France, they don't give you as many opportunities into the game as they used to because they are tuned in the whole time, and that's what we need to see from Ireland.

We need to see a performance that ends as strongly as it starts; a full 80-minute display.