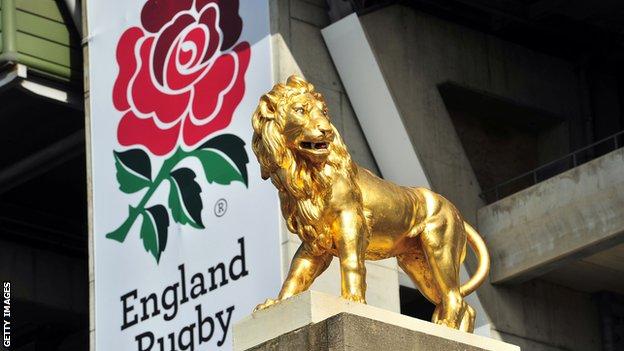 The Rugby Football Union is warning of a possible £145m in lost revenue and says it could take up to five years to recover from the Covid-19 pandemic.

English rugby's governing body has suffered with fans not being allowed at Twickenham since March, and lost income from broadcast deals.

But the RFU did keep operating losses within budget for 2019-20, according to its annual report.

The organisation asked for a government support package for the community game.

The RFU had budgeted for 2019-20 to be a loss-making year because of the costs incurred during the 2019 Rugby World Cup, in which England reached the final, and the fact it hosted two Six Nations games rather than three.

England men's squad accepted a 25% pay cut in September, with head coach Eddie Jones doing the same six months earlier. The men's and women's sevens sides have both had their funding cut.

"In the immediate term we also have to recognise that we are not in a position to carry the whole game through an extended financial crisis.

"We have therefore requested that the government makes available a package of support for recovery funding to protect the integrity of the community game."