Saturday's Premiership final between Exeter Chiefs and Wasps will be like no other before because of the Covid-19 pandemic.

With the best part of 80,000 empty seats, Twickenham's atmosphere will resemble that of a park game rather than the razzmatazz of a big final.

The game is already four months behind schedule because of the coronavirus shutdown midway through the season, with squads of players assembled for 2020-21 completing the 2019-20 campaign.

Here are some of the stories behind English club rugby's showpiece game. 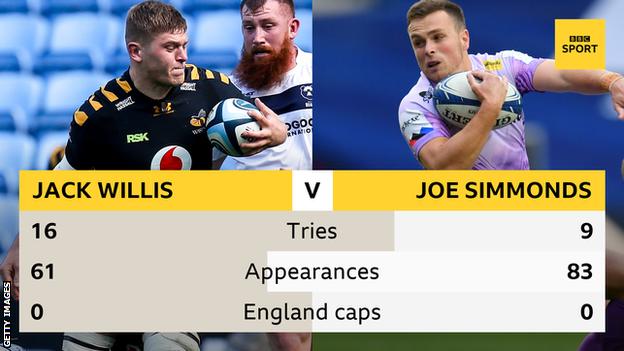 While the array of international stars will not be seen by any fans inside Twickenham, the eyes of the rugby world from afar will be on two young uncapped Englishmen who have been leaders for their respective clubs this season and friends for a number of years.

Wasps' Jack Willis has taken a clean sweep of awards this year and dominated the breakdown since returning from a serious knee injury that ended hopes of an England debut more than two years ago.

On the opposing side is Joe Simmonds, Exeter's captain and fly-half.

The 23-year-old led his club to the first European Champions Cup on 17 October, and is hoping to guide the Chiefs to a domestic and continental double.

"I roomed with Joe at an England Under-20 camp during the Six Nations," Wasps flanker Willis, also 23, told BBC Sport.

"He's a great lad, in fact the first time we ever played against each other was when we were about 17, I think he was at Ivybridge College and I was at Henley College.

"It's been interesting seeing that we've kept coming into contact throughout the different levels we've been playing at and fortunately now we're very excitedly playing on one of the biggest stages in English rugby."

Like Willis, whose brother Tom plays alongside him at Wasps, Simmonds is also part of a family dynasty at Exeter.

His brother Sam was named European Player of the Year after being the Champions Cup's top try-scorer.

And, like Willis, Joe Simmonds is being spoken about as a future England player.

Since his full debut in March 2018 against Saracens, he has unseated club legend and record points-scorer Gareth Steenson as Exeter's fly-half.

"He's a good mate and great person to be around," Simmonds said of Willis.

"I think it's credit to how hard he's worked to get back from such a bad injury. He's definitely playing his best rugby at the moment and he's been brilliant this year for Wasps."

While George Ford and Owen Farrell have been Eddie Jones' go-to players in recent times, Simmonds is one of a number of talented youngsters coming up through the ranks alongside Harlequins' Marcus Smith, Wasps' Jacob Umaga, Saracens' Manu Vunipola and Northampton's James Grayson.

"I would love to play for England, I think it's anyone's dream growing up wanting to play for your country," added Simmonds.

"It definitely pushes me on more seeing Sam having played seven times for England, but for me at the moment it's just making sure I perform and win trophies for Exeter. If I'm doing that, hopefully I'll get the recognition if I'm playing well enough to play international rugby."

Coaches that go back a long way 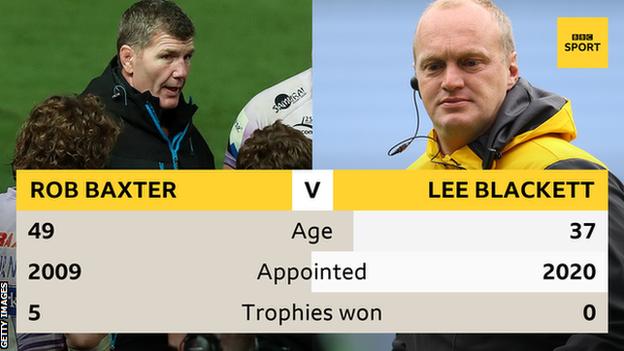 The two respective coaches have history as well.

While Exeter's Rob Baxter is the longest-serving director of rugby in the Premiership, Lee Blackett's tenure at Wasps is just 12 games old.

But the pair were adversaries in English rugby union's second tier as players; Blackett's Rotherham side were the opponents in Baxter's last game as a player for Exeter, with the Chiefs winning 41-33 on a hot April day in 2005.

"I scored a try," recalled Baxter. "I don't remember too much about Lee playing on the day, but I do remember playing against him on several occasions."

With Wasps having worries over whether they would be able to play in the final after a spate of positive Covid-19 tests, dialogue between the pair has been regular.

"We've actually had quite an open relationship talking backwards and forwards, especially these last three or four weeks around the Covid situation," added Baxter.

"I've given Lee the odd bit of advice about some things, he's spoken to me very openly in these last two or three weeks around Wasps' scenario.

"I think there's sometimes a myth around directors of rugby that we don't communicate off the record, it's all done through the papers. It's a load of rubbish, a lot of texting goes on, a lot of very open conversations go on about all kinds of things."

Blackett said: "The Exeter team reflect him (Baxter) in a lot of what they do.

"He was tough and physical, Exeter was a horrible place to go, especially in the old ground that they had.

"He's a great guy, someone I massively respect with what he's done for that club over the 10 years. How can you not respect where he's taken them?"

That respect extended to Blackett texting Baxter early on Wednesday to tell him that his Wasps side had been given the all-clear to play Exeter, allowing Baxter to focus his efforts on Wasps rather than Bristol, who had been on standby to replace them.

"I would like to think Rob would do exactly the same," added Blackett.

"I thought it was only fair, I know if I was Rob you'd be worried about who you were going to play, so I sent him a text at 06:30 just letting him know to give them as much preparation, it's just the respect we have for each other."

The spectre of Covid-19 has loomed large over this final but, for those at the sharp end, it led to sleepless nights as they waited to find out if they will be allowed to play.

"I was checking my phone all night," Wasps captain Joe Launchbury said of the club's final round of tests, which came back negative in the early hours of Wednesday.

"I was following our head physio Ali James, he's been brilliant, you can go on WhatsApp and see when they last accessed it.

"I was looking to see when he was last online and I knew if he was up, there must be some motion going on."

As it transpired Wasps were cleared to play, but their advantage of two clear weeks to prepare for Exeter was ruined. Rather than team drills and tactics, players have done individual fitness work at local rugby clubs.

"The games so far up until now we've had very short turnarounds, so we targeted this as a bit of a different way to prepare for a game, but that's obviously been taken away from us," added the World Cup finalist.

"But I'm really happy with the way everyone's prepared, the backroom staff have been fantastic and all the players have been spot on as well."