Seven months since the Six Nations was prematurely halted and four since the summer tour was cancelled, Gregor Townsend has convened his Scotland players to prepare for a hectic autumn.

It is exceedingly rare for a coach to get his paws on his playing group for so long, and to have the luxury of six Test matches against high-calibre opposition in a single window.

Townsend will look to build on an encouraging start to 2020, blood new players, and compete with aplomb in the inaugural Autumn Nations Cup.

Here are the key issues facing the Scotland boss in the weeks ahead.

Townsend's biggest task is to reintegrate his most important player.

Finn Russell is highly motivated to play for Scotland after an unpalatable fall-out with the coach and an international exile. The fly-half is in scintillating form for his club side, Racing 92, with the most assists in the European Champions Cup en route to a narrow defeat in Saturday's final.

During his two years in Paris, Russell has matured as a player and a leader and eradicated much of the flakiness that used to blight his game.

He is arguably the form pivot in world rugby and absolutely vital to so much of what Scotland do.

Rebuilding their working relationship and allowing Russell to motor again on the Test stage will be absolutely crucial.

Scotland's heinous away record is well documented, and dates way beyond Townsend's reign - in fact, you can trace it back to the 47-year-old's playing days, so long has it plagued the national team.

Scotland were solid and professional in putting Italy away in Rome earlier this year and there was another near miss against Ireland at the Aviva Stadium.

A win in Wales at long last would be a sensational conclusion to their championship on 31 October - and it is certainly not beyond them.

There will be another trip to Italy two weeks later - a game Scotland will be expected to win - and one more away day on the final weekend of the Autumn Nations Cup against a yet-to-be-determined opponent.

Scotland's line-out operated at a poor success rate of only 75% during the Six Nations, winning 42 of the 56 set-pieces on its own throw.

Awful conditions in the second-round loss to England did not help, but this was a drastic regression from the World Cup, where the Scottish line-out was the second best in the tournament.

Danny Wilson stuck around as forwards coach in the early part of the year at Scottish Rugby's request before he took charge of Glasgow, and was deeply frustrated by the drop in performance.

John Dalziel has now succeeded the Englishman and one of his top priorities will be addressing this faltering area.

At 6ft 4ins and well over 100kg, Van der Merwe is a frightening physical prospect. Scotland seldom produce wingers of his build and dynamism.

The 25-year-old averages more than a try every other game for Edinburgh (31 in 60 outings) and since his Pro14 debut in November 2017, nobody in the competition has scored more tries, made more metres and clean breaks, gained more metres per carry or beaten more defenders.

There are flaws in Van der Merwe's game, particularly around his soft skills and positional awareness, but he has worked hard to address them and can be a terrific addition to Scotland's attacking arsenal. 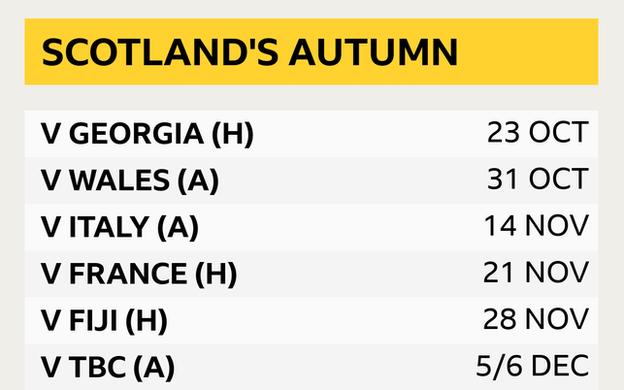