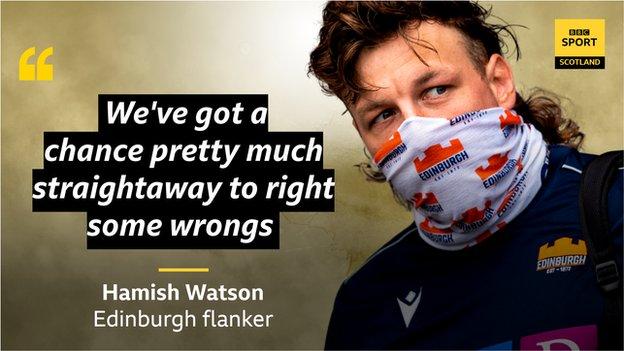 In normal times, Edinburgh would be trapped in a rugby no-man's land right now, the misery of their Pro14 semi-final loss to Ulster just behind them, with the chance of redemption way too far ahead.

Hamish Watson and the rest would have had to stew on their Murrayfield failure for months, right throughout the summer, into the autumn and onwards to spring.

These are not normal times, of course. Covid-19 has seen to that. The redrawing of rugby's calendar gives Watson's team a rapid opportunity to play the debacle at Murrayfield out of their system on Saturday when they face Bordeaux in the quarter-finals of the European Challenge Cup.

With coronavirus cases on the rise in that part of France, the travelling party from Edinburgh will not be hanging about. A charter flight on Friday, a bus straight to their hotel, and a mini lockdown until it's time to head for Stade Chaban-Delmas. On full-time, they'll be out of there like lightning. Airport, flight, home by Saturday night.

Watson remembers what it was like against Bordeaux the last time. The clubs met in the group stages, a draw at Murrayfield, a home win in the return game. A big local crowd, a raucous atmosphere, Semi Radradra running amok. None of those things will apply on the weekend. A smattering of supporters, a muted vibe and no Radradra, who's now a Bristol Bear.

"Bordeaux will feel hard done by with the way their league ended," says Watson. Christophe Urios' team were eight points clear at the top of the table when the league was abandoned.

'Truths were spoken; it was pretty savage'

For a side chasing their first league title since the vaguely psychotic, and hugely celebrated, front-row of Serge Simon, Vincent Moscato and Philippe Gimbert were in their pomp nearly 30 years ago, the premature end to the campaign was a sore one.

Like Edinburgh, they will see the Challenge Cup as a chance to get something tangible to show for all their fine work during the season.

For a rugby nation that is often criticised for not giving the Challenge Cup the respect it deserves, French teams have won three of the last four finals. Bordeaux are now favourites to follow on from Montpellier, Stade Francais and Clermont.

There's no Radradra, but the spirit of attacking rugby remains. "If I do not get them to attack, I am the king of idiots," said Urios of the creative players in his ranks.

Watson knows what lies in store on Saturday. He also sounds like a man who is utterly desperate to get back out there in an attempt to rid himself of the dejection of that loss to Ulster. Like a bad smell, it's been following him around for a few weeks now.

"We're lucky that we don't have to wait all summer before we play again," he says. "We've got a chance pretty much straightaway to right some wrongs.

"That Ulster game still hurts. We were masters of our own downfall. We let it slip, but at some point you have to draw a line in the sand and move on because dwelling on it doesn't help anybody. We had a big meeting on the Wednesday and went through it, minute by minute, mistake by mistake.

"A few truths were spoken. The way we get better is by players and coaches calling each other out after something like that. It was a pretty savage meeting. We watched the whole game back, broke it down, asked ourselves 'what were we thinking here?' and 'what's going wrong there?'

"All the things that went wrong didn't amount to a huge amount in isolation but put them all together and it's the difference between winning and losing.

"When we had a 12-point lead heading into the final quarter, not many people would have been betting on us to lose. We're normally very good at controlling the game from there, playing in the right areas, slowing it down, exiting properly, keeping our discipline. Maybe it was the occasion.

"Once they made it 19-all, they had momentum, they got every bounce of the ball, their tails were up. We're kicking ourselves. Subconsciously, we're thinking we've messed this up massively. That's not a nice place to be."

'We believe we can win there'

It was the fourth knockout match, and the fourth loss, under Richard Cockerill. Watson says that Edinburgh have no choice but to use these experiences to their advantage.

As a fan of American football, he mentions that the Buffalo Bills lost four Super Bowls in a row from 1991. They're not the best model - the Bills haven't been in a Super Bowl since.

Perseverance paid off for both. There were multiple times when they could have become demoralised and jaded, but they kept going. They refused to fade away. Edinburgh must now gather themselves in the same way.

"We have to bounce back - and it's going to be hard, we know that. We've played them twice and probably should have beaten them instead of drawing with them in Edinburgh. We played really well for long periods in France.

"They're an excellent team and they're favourites, but we're going there to win. We believe we can."