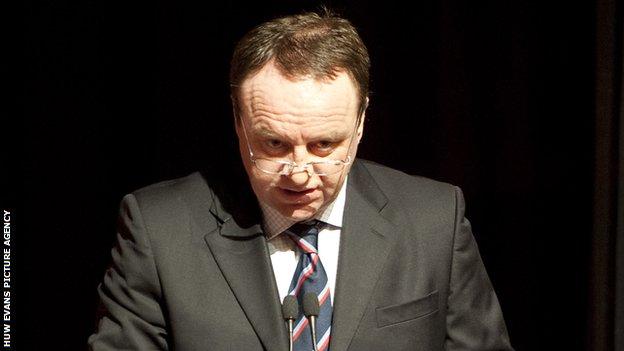 Current incumbent Martyn Phillips will leave his role after the next annual general meeting in October.

Steve Phillips will assume responsibility for the day to day running from 14 September before taking on the role fully after the AGM, scheduled for 18 October.

"It is both an honour and a privilege to take on this role," he said.

"I am hugely confident about what the future holds for Welsh rugby.

"There are undoubtedly tough times ahead. But with the right planning, resource and strategies in place Welsh rugby will be in the very best position to not only continue to build sustainability but to also thrive in spite of the unprecedented challenges we face."

Phillips has been with the WRU since 2007 and had previously spent 10 years at TBI, where he was group financial controller and then group finance director.

Martyn Phillips had been due to leave his post during the summer after five years in charge but stayed on due to the coronavirus pandemic.

WRU chairman Gareth Davies said uncertainty caused by the pandemic "had been a challenge both for candidates and the union" and that he had asked Steve Phillips to take interim charge.

"He is entirely familiar with the business and as such will hit the ground running," Davies said.

"In the interests of transparency, we also discussed with Steve the fact that a possible new chairperson would more than likely prefer to appoint their own chief executive, I know I would.

"Steve was fully supportive of this approach and this is the reason for appointing on an interim basis."