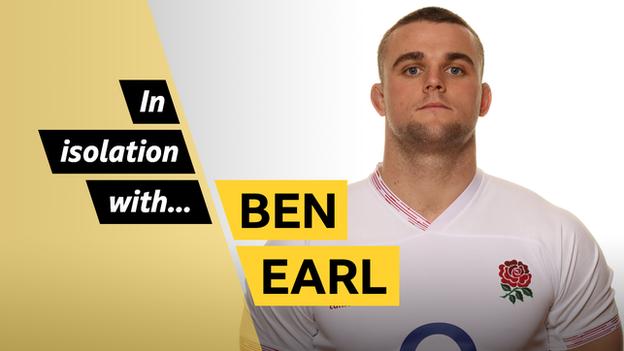 Ben Earl has already had a season full of highs and lows on the field, suffering relegation with his club Saracens before making his international debut for England during the Six Nations.

With the 2019-20 campaign suspended indefinitely because of coronavirus, the back-rower, who also has a degree in comparative literature, has put his great off-field passion to good use by compiling a list of must-read books during lockdown.

Just weeks ago I hit the peak, making my England debut in the Six Nations.

It finished with a win at home against Wales and you can't get much better than that. But on that day at Twickenham, we also knew there were bigger things at stake because of the pandemic.

We knew beforehand that it would be the last time we would be together as a team for a long time. We threw ourselves into it knowing there was nothing after that and we didn't want to leave the field with any regrets.

For me, I knew the Italy game - scheduled for a week later, which was our first to be postponed - could have been a big opportunity for me to have a bigger run-out, but I quickly accepted it for what it was.

I'm using the time I have at home now back in Kent to ensure that I have plenty more opportunities.

Speaking with Eddie Jones and other coaches, I know it's at this point in an England career that people can disappear. There are very few people with 10 or 15 caps - it is more either three, four or five, or 40, 50 or 60. So that is the way I'm looking at it. I want to be in that latter group for sure.

This time of home isolation has allowed me to really reflect, otherwise that achievement of playing for England for the first time is something that is quickly brushed under the carpet as you get back into club mode.

I feel like I have only just settled into the Sarries team and then I've been thrown into the England set-up - it's come thick and fast.

It has been nice to pause.

I'm back at home with my parents and brother, where I'll raid my dad's archive of books, which are spread across random bookshelves. Already I'm through two books, both crime novels.

I'll take it one book at a time, but I've got a few titles and authors that I can recommend for anyone reading at home.

The Blind Man of Seville

Full disclosure, I'm a big murder-mystery man. There is a whole bucket load of those I could recommend.

I grew up watching Inspector Morse, Poirot and Agatha Christie and all that stuff - it was forced on me to a point and I've grown to love it.

My favourite is The Blind Man of Seville. He is all about war time and bringing it back to modern-day Europe and stuff.

I've already got through Conclave by Robert Harris during lockdown, which is a fictional story about how they chose the new Pope. It has everything - corruption, murder, a ghostly past.

Another book by Robert Wilson that I've read is A Small Death in Lisbon, which is about an investigation that the detective links back to World War Two and the movement of gold into Portugal.

If you want to go for a classic, I recently enjoyed Jane Austen's Pride and Prejudice. I'd never picked it up before and ended up loving it.

I wouldn't exactly call it a thriller, but I found reading from the perspective of a woman, especially considering it was published at a time when they were rarely either a lead character or had strong voices in books, interesting.

It is different to what I was reading while studying for my degree in comparative literature or even at A Level. A lot of that reading was Shakespearean, for example, and often all about the powerful male who the woman would either bow to or support.

I also enjoy poetry and a secret hobby of mine is Caribbean poetry.

How I got into it started with my enjoyment of Greek epics like Homer's Odyssey. I did a module on it at university, then I thought 'right, I'll do this for my dissertation'.

As loads of people were likely to do exactly the same, I was steered towards something more eye-catching - it's called Omeros by Derek Walcott.

It is a great Caribbean poem based on the Odyssey but set in a 1980s scene in Saint Lucia. That is what I ended up doing my dissertation on.

At 300 pages it is a very long poem, but it is very accessible.

That kicked off deeper reading for me. Generally, I would say anything by Derek Walcott is very, very good.

I've got a real passion for reading and I graduated from Queen Mary University in the summer with a 2:1 - a bit of a smash and grab, that - and I'm glad I have that in the locker.

By Andy McNab (part of the Robert Rigby series)

I'm not really one for any guilty pleasure reads, but when I was younger I did enjoy reading books by Andy McNab, the former SAS soldier.

They can be really easy reads and you can get through them quickly. There is lots of action, plenty of dying, lots of girls and shooting. I found them nice to chill out with, especially when I was trying to get through economics essays and stuff like that.

It's not necessarily a sports book, but Black Box Thinking by Matthew Syed is one I would recommend in that category.

The traits that the book portrays are very transferable into sports and something which intrigued me greatly. It's all about progressive thinking and striving for better rather than standing still.

What I have to look forward to now is getting back into a Sarries shirt, because there is an element of guilt I have that I'm not going to be involved in the Championship campaign next season - which, let's face it, will be unglamorous.

I feel like I'm having my cake and eating it when I come back and Saracens are hopefully promoted back to the Premiership.

The decision to go out on loan next season to Bristol Bears was difficult but one made easier when told by higher powers - and I can't name names - that I wouldn't be considered for England if I was playing in the Championship.

I want to play for Sarries for as long as I can and, while I know I will have the opportunity again in season after next, it's this year more than any that is the time to give back for all they have done for me.