The Rugby Football Union has confirmed the end of the season for all levels below the Premiership following the coronavirus outbreak.

The move, which applies to "all league, cup and county rugby in England", means the Championship campaign will finish with at least seven rounds to play.

Newcastle Falcons are top with a 100% record, but are yet to seal promotion.

The RFU said a further update would be issued in April as they aim to "ensure fair and balanced outcomes".

Saracens' relegation from the Premiership has already been confirmed following persistent salary cap breaches, meaning Falcons are likely to replace them in the top flight.

The Premier 15s - the top division of women's rugby in England - has also ended early following the RFU's decision.

Sarries are top of that league, two points above second-placed Harlequins, but it is not yet clear whether they will be awarded the title or the season will be declared null and void.

"We are working through the implications of ending the season early and have instigated a thorough process to ensure fair and balanced outcomes for the game," said RFU chief executive Bill Sweeney.

"While we would like to provide all the answers now, we need some time to get it right for the best interests of the game.

"Rest assured we are working on this as a priority and we will continue to send weekly updates to clubs."

Sweeney said the RFU was in "active discussions" with the Premiership, which was initially suspended until 14 April on Monday, to "review possible best next steps".

The final round of fixtures are due to take place on 6 June and the Premiership final scheduled for 20 June, with the domestic season having started later than usual following the World Cup. 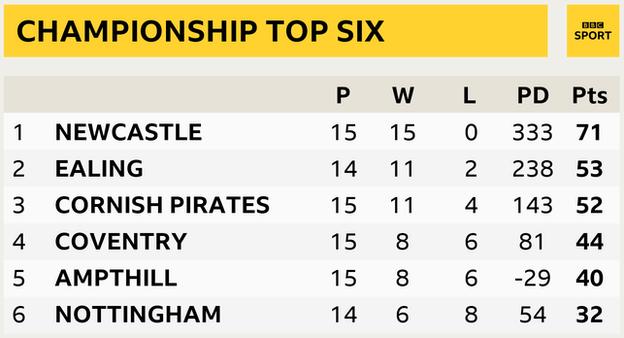 Sweeney said the RFU was working through "a range of potential financial scenarios" and that it was "already budgeted to be a loss-making year".

"The loss will now be considerably more as we face challenges similar to businesses across the entire country," he added.

"There may well also be much longer-term financial implications which we are assessing now. It is therefore taking us some time to develop a considered position on how we can support clubs and the rugby community, which we will do.

"The implications for all areas of rugby will be thoroughly worked through and solutions discussed and developed with the clubs."

Nottingham chairman Alistair Bow told BBC Sport that he "always believed" the sport would be unable to return before September.

"What the RFU now needs to do is very, very quickly get financial support to all the community clubs, like the Welsh and Scottish have done," he added. "Community clubs are going to be commercially ruined for the foreseeable future."

The County Championship has been running since 1889 and has previously only had breaks for World War One and World War Two - although the 2001 event was heavily hit by the foot and mouth outbreak, with Yorkshire and Cornwall being invited to play a final at Twickenham that year.

The tournament draws its players from the top echelons of the community game in England, primarily National Leagues One and Two.

"We had a good uptake this year and lots of people were keen to put on the black and gold so it's very disappointing."

The tournament had a restructure in 2017 - and Dawe is worried that the event will not return in 2021.

"There was talk about this possibly being the last County Championship with the structure of the season under stress," he told BBC Sport.

"We've had a review and they're yet to make their findings known about restructuring the leagues.

"Hopefully the restructuring of the leagues will leave more space for the County Championship to be a bigger event in the future."