The New Zealand-born Cardiff Blues centre was set to play for Wales against Barbarians before injury ruled him out.

He told the Scrum V Podcast: "I don't know whether it just comes to race or the way I am, my personality. I'm not too sure.

"I had seen some racist comments."

The 29-year-old, who has a "huge" Tongan family, qualified for Wales through residency rules after spending three years playing for the Blues.

He says he found it strange other New Zealand-born players who qualified the same way were not criticised on social media, with Hadleigh Parkes and Johnny McNicholl also eligible on residency grounds.

"I've seen two other Kiwi-born players receive a huge welcome and then there's a few question marks over me," he said.

"I don't try and call it out. It's mainly on Twitter that I see these things. It's people that I follow fighting for me against these people and then it comes up on my timeline.

"I never go looking for it but when I come across it, it's a little bit disheartening." 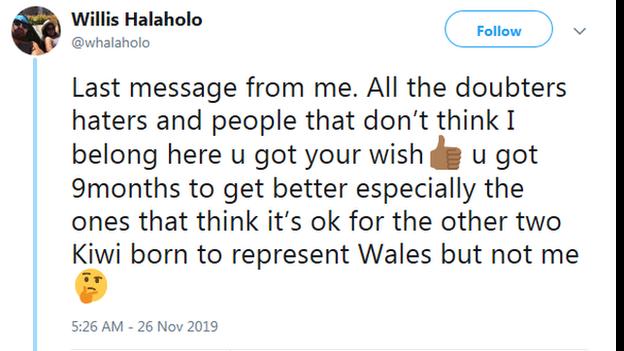 In November 2019, Halaholo hit back on social media, at critics of his selection for the Wales' squad.

"I sort of expected [criticism] because I'd already seen a build-up towards it," said Halaholo.

"There are some trolls out there that tag me, and there's no need.

"You can have your opinion but I don't need to have a notification of you talking about me in that way, saying I don't deserve to be here.

"I have nothing against the [residency] rule - if you are against the rule that's fine, I don't care, it's your opinion - but it's more like picking and choosing who they think deserve it."

Halaholo was ruled out with a long-term knee injury suffered in Cardiff Blues' Challenge Cup defeat against Leicester in November 2019, just three days after his first Wales call-up.

The 29-year-old admits he would not have responded to social media comments if he had not been injured.

"That's because you go from such a high - named in the squad on the Wednesday - and then on the Monday I am called in, told my season's done. You've done your ACL - six months," he said.

"I had been really happy. I was looking back on the last three years on the work I've done and the family I've made here with the Blues supporters and I was looking to branch myself out to the rest of Wales and see what I can do, but it wasn't to be.

"It took a while, a couple of weeks, to get over it and have my operation but I'm back on the horse now and ready to go."

Halaholo says he was encouraged by some reactions to his tweets.

"I was surprised and overwhelmed by the support," said Halaholo.

"People have inboxed me on Facebook and said they are happy to have me here in this country that's been good for me.

"It doesn't faze me - I've gone through worse in life. I just felt it a bit funny that a couple of other guys who qualified the same way as me were welcomed a bit more differently."

Halaholo is now targeting a return in mid-May, with Wales touring Japan and New Zealand in June and July.

Early troubles and 'a line in the sand'

Halaholo also talks frankly in the podcast about his troubles as a young man in Auckland, going to school only to play rugby and spending days drinking with friends.

He also discusses becoming a father at the age of 17 and how he neglected his responsibilities before coming to his senses when his daughter started leaning on her grandfather as a parent rather than on him.

"The only thing that saved me was having a daughter at a young age - that sort of made me grow up a bit faster and change it around before it was too late," said Halaholo.

"When she was a baby I didn't know how to be a dad. I guess it only clicked for me when my daughter would go to her grampa more than myself.

"She would lean towards him being a dad rather than me and that sort of struck a chord with me, and I was like 'OK, I've got to change things'.

"That was the line in the sand and I said right, I need to be a dad here and start changing things up."