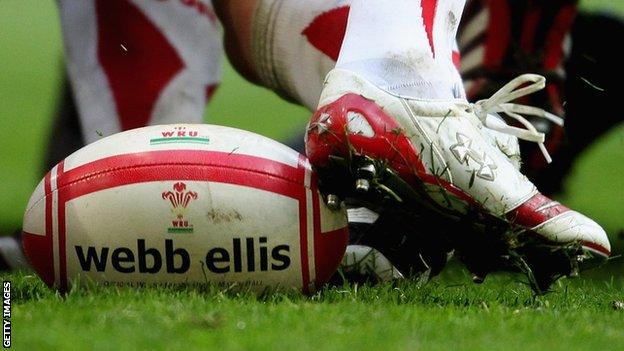 A Welsh rugby club has suspended one of its players following an allegation of racism that prompted opposition players to walk off the pitch, bringing a game to an early end.

The Welsh Rugby Union (WRU) confirmed a Trefil player was sent off by the referee for alleged racist abuse.

Dacruz reacted and, because he had been yellow-carded earlier in the game for a technical offence, was also sent off.

A total of three red cards were issued during the match at the Llanrumney Hall ground in Cardiff.

In a statement on the club's Twitter page, Llanrumney said: "Never heard anything like it on a rugby pitch before!

"Boys had no option other than walking off, hope it gets dealt with properly by the WRU.

"To be fair to the rest of the Trefil RFC boys, most of them apologised for the incident and one of the coaches popped into our changing rooms after and also apologised. Can't tar the entire club with the same brush!"

The WRU says it will wait for the results of a hearing before deciding on a further course of action.

"We have received the referee's report in relation to a red card issued to a Trefil player during their match against Llanrumney on Saturday for an alleged case of racial abuse," said a WRU spokesperson.

"The club has seven days in which to respond to the charge before a disciplinary panel is arranged to hear the case. There is no place for abuse of any kind in the game."

In a statement, Gwent club Trefil said: "In light of the recent allegation made against Trefil RFC from Llanrumney RFC, as of Saturday we as a club have officially suspended the player from all club activities pending a full internal investigation and the subsequent investigation from the WRU.

"We will cooperate fully with the WRU. We as a club do not condone any derogatory abuse in any way and will act accordingly to uphold the good name of our sport.

"Following the game on Saturday, our officials spoke to the Llanrumney officials and relayed this to them.

"We do not intend to get into a social media debate, but rather will act accordingly and appropriately as advised by the WRU."