The trophy lift, the ticker-tape, the hand-shakes and the consoling hugs.

All very nice, but it is when you get back to the sanctuary of the dressing room that a champion team can really let their hair down.

As South Africa proved in the aftermath of their Rugby World Cup final win over England.

First, up the obligatory group shot. Eben Etzebeth's telescopic arms would have done a better impression of a selfie stick though.

Then, as the wedding photographer would ask, some more intimate group shots. The second row union of Franco Mostert, Lood de Jager, RG Snyman and Etzebeth, looking like an indie folk band on protein shakes, pose for the camera.

Meanwhile, Pieter-Steph du Toit and Duane Vermeulen review the game over a bottle of the sponsor's best...

...and Cheslin Kolbe and Willie Le Roux send snaps of their new neckwear.

What's that? You are still thinking about that first picture? Thought you imagined Faf de Klerk in nothing but a pair of patriotic budgie smugglers? You didn't.

Well, this is in no way awkward. The Duke of Sussex, who memorably spent the evening after the 2003 final celebrating with the victorious England players, pays a well-wishing visit to the Springboks dressing room.

Fortunately, Prince Harry has the small-talk smarts to smooth things over. Although does that smile look a touch forced?

And he is not going to let a small thing like a complete lack of outerwear put him off the congratulatory shoulder grasp as he meets Faf de Klerk.

Mbongeni Mbonambi is accessorising with some box-fresh Springbok merchandise....

...as Etzebeth gets on his impressive muscle-flex flex...

But there is only one place to leave this. An image almost as enduring as Siya Kolisi's trophy lift. Congratulations South Africa. 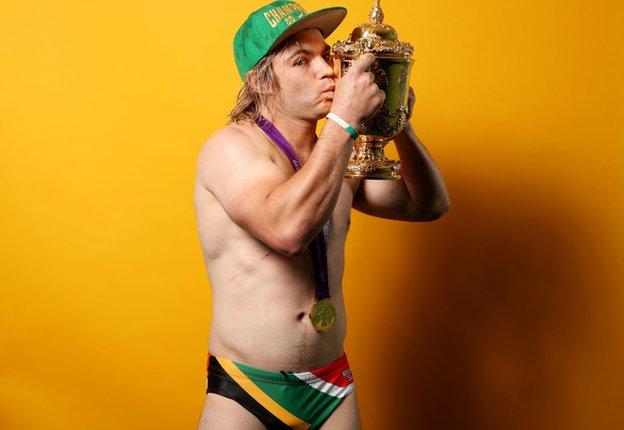