The Springboks won a record-equalling third world title after beating England 32-12 in a dominant performance in Yokohama.

Kolisi, who became the first black South African captain to lift the William Webb Ellis Trophy, says victory will "pull the country together".

"We had one goal and we have achieved it," said Kolisi.

"A lot of us in South Africa just need an opportunity and there are so many untold stories."

The 28-year-old flanker wears the iconic number six jersey for the Springboks, which was the same number worn by Nelson Mandela when he handed the same trophy in 1995 to South Africa captain Francois Pienaar - who also wore number six.

Kolisi, who grew up up in a poor township of Zwide, just outside Port Elizabeth on the Eastern Cape, flew his father abroad for the first time to watch him represent his country in Japan.

He added: "You can never forget where you come from or the people who have helped you get here so I just wanted to celebrate with him [his father].

"Growing up, I never dreamed of a day like this at all. When I was a kid all I was thinking about was getting my next meal."

The skipper said coach Rassie Erasmus told the players they were not just playing for themselves, but for all of South Africa. The country is suffering an economic crisis with unemployment at 29% and Kolisi said he has "never seen south Africa like this".

"We have so many problems in our country but a team like this, from different backgrounds, achieved our goal," he added.

"Coach Rassie supported me when I was 18 years old and I've been working hard since then."

Springbok try scorers Makazole Mapimpi, who also comes from a poor township like Kolisi, and Cheslin Kolbe are both black and the skipper said his side's performance shows how "different races can come together".

An emotional Mapimpi, who scored the Springbok's first try in their third World Cup final, was also in reflective mood after the full-time whistle, saying he had come a "long way".

"I didn't make the South Africa schools [team]. It means a lot for me, but also for the boys who didn't go to private schools.

"A lot of things happen in South Africa that affect us and we fight to push those things away.

"This is a big achievement for me, it's my first World Cup and I have won it."

South Africa coach Erasmus echoed his captain's comments, saying rugby is "privilege" after leading his country to glory in his first World Cup as coach.

"In South Africa pressure is not having a job, pressure is one of your friends being murdered," he said.

"Rugby shouldn't be something that creates pressure on you, it brings hope.

"Hope is when you play well and people watch you on Saturday, have a nice barbecue and watch the game and feel good after."

Erasmus took the decision to hand Kolisi the armband in May last year and the Springboks coach said it is "tough" for his captain to tell his story.

"It's easy to talk about going through hard times and struggling to get opportunities, but it's tough to tell people that there were days when I didn't have food or shoes to wear," he said.

"And when you sit down and think about it clearly, and think there was a stage when Siya went through stuff like that, then he sits here as captain holding this trophy.

"That should sum up what Siya is."

Even as a guy who has won it, this is a far bigger occasion because of where we are as a country at the moment and where we are going. I always wondered if it was too much of a fairytale to see Siya win the trophy, but it could not have happened at a better time. To see a guy like Siya be able to lift the World Cup trophy, it will have a significant impact on our country.

In a team that used to represent segregation, but now represents unity, to be led by a black African man is more significant than anyone could ever imagine. This team has handled this emotional rollercoaster so well and they have acknowledged their responsibility. Today was magical.

The significance is so much more than just a rugby game that's been won, it's for the whole country. We've been in the doldrums but they've been able to get themselves out of it and lift that beautiful trophy.

Schalk Burger, a member of the 2007 World Cup-winning team

We thought England's performance in the semi-final [against New Zealand] was the performance of the World Cup but this performance was just outstanding. The thing I enjoyed most about it was our attitude. We played rugby the way only the Springboks can and we dominated every facet of play. 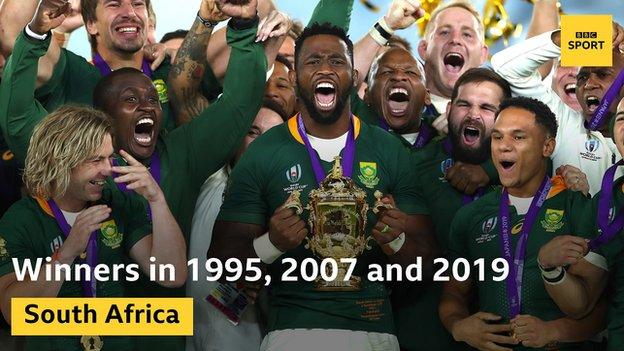 Social media reaction - 'What a story'