Elite rugby can break bodies and its pressures can make the physically indomitable falter and fall. World Cup finals change lives and that knowledge can shackle even the best.

Owen Farrell will lead England out against South Africa on Saturday as a player who appears immune to all that and so much more.

You watch Farrell and it all seems so straightforward that you forget how complicated simple can be.

You can follow him round Japan for seven weeks and still find something unknowable about him, because there appear to be no doubts or darkness behind the unyielding exterior.

The man who started at fly-half for England in their two previous World Cup finals, Jonny Wilkinson, was tortured by his own genius and the expectations put on him, by himself and others, as a result. The dialogue was all internal and you feared for where it might take him when it was all over.

Farrell strips it all back. The team-talks, the interviews, the attitude.

Go harder than the opposition, impose your will upon them. Show no fear. Look around your team and into their eyes, show them what you have and where you want them to be.

"The only voice I heard in the first training session he had with England was Owen's," remembers former team-mate Danny Care.

"And in the meetings. I was taken aback. I'd never heard it from such a young guy, in an England team.

"But one training session and I was in. I was fully under his tutelage. Because he is the best, and he was the best, even when he came in at 19 or 20.

"He knows that every team will come after him, because he's the man. And he relishes it, he loves it, he wants it. He laughs when people hit him hard."

Sporting leaders are supposed to be great orators, sending their team-mates out with long, stirring speeches, or crashing heads against walls. Shakespeare or blood and thunder, or both.

You hear Farrell in the huddle at training sessions and it's like a James Ellroy novel. There is nothing loose and there is no fat over the muscle.

Two days out from the quarter-final win over Australia, down in Beppu, on the southern island of Kyushu - 22 men in muted red and white training shirts gathered around him.

In that moment, facing the haka, you saw more of Farrell than you might have in the eight years that led to it. No doubts, just a precise statement. 'This is me. What have you got?'

"I know this is training right."

"Put yourselves in a position today to be brutal."

A week on, and three-time world champions New Zealand lie ahead in the semi-final. A midweek training session, Farrell calling the team in and waiting until all were intent on his words.

"We're going to punish them with good decisions. Right?"

"We're going to play this game at our pace."

"Our pace. Not how they want to play it. Right?"

Farrell came into the England team in the aftermath of their scandal-hit exit at the quarter-final stage of the 2011 World Cup. He was there when England crashed out earlier still in 2015.

Now, aged 28, in his prime, he believes this is his moment, and for the team he leads.

All those years of watching his dad Andy as he played rugby league for Wigan, England and Great Britain, and then Saracens and England again at the 2007 World Cup. His uncle, former Wigan captain Sean O'Loughlin; his grandfather, Keiron O'Loughlin, who played 260 times for Wigan and 119 times for Widnes.

Sitting as a kid in a Wigan dressing room containing talents like Jason Robinson, Kris Radlinski and Denis Betts. Watching, learning, growing up like so few others.

"Owen is out of a proper hard-core, winning rugby mentality," says Martin Johnson, the only Englishman to lift the Webb Ellis Trophy.

"You can tell without knowing him that he's going to perform consistently week in, week out and get better. When you're 20 minutes to go in a Test match, who do you want in your team?"

Chris Ashton, another rugby league kid from the Wigan hot-house to make it in union, sees in it similarly stark terms.

"Owen is a winner. It's working, it works for the team and you win, so you do what he says. Simple as."

Being kicker as well as captain should layer on a little more pressure again. Saturday's final is unlikely to be the giddy romp that the semi-final triumph over the All Blacks turned out to be. It may be won off the tee, from close in and out wide, when the whole world is watching and your team-mates have retreated.

I once tried to put a piece together about what it's like for a place-kicker in those frozen moments. The game stopped, no-one looking anywhere else than you, the match maybe hanging on what can do in those next few seconds.

Former England fly-half Charlie Hodgson told me it could feel like the loneliest place in the world. Paul Grayson, third on the list of England's all-time points scorers, once almost walked out of the team hotel before a game because the nerves and self-doubt were so intense.

I put those stories to Farrell and asked if he felt the same. He looked at me as if I was mad. "No! You're just kicking a ball!"

He is the same now on the eve of the biggest game of his life. It is not an act. That childhood, his obsessions, all those crunch games with Saracens that led to five Premiership titles and three Champions Cups.

"I don't think he was born as good as he is," says Jamie George, his team-mate at Saracens and with England, who has known Farrell since the pair were 14 years old.

"He's honed his talents, incredibly so, and he's developed as a player and a person so much over the past 10 years. That's the impressive thing about him, and he'll continue to develop until he hangs up his boots. 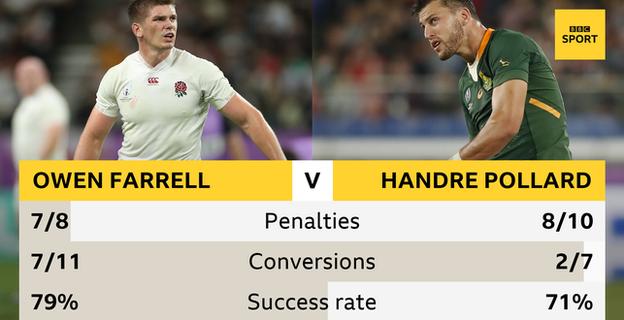 "He's a proper student of the game. He loves it. That's a large part of why you trust his opinion, because you know for a fact that not only is he the best at doing it but that he's watched more tape and thought about it the most.

"He leads from the front. He's incredibly committed. His messaging throughout the week is brilliant, and it makes the team feel so ready on Saturday. He builds our confidence up during the week, and a large part of that is down to him.

In his captain, coach Eddie Jones sees much of himself reflected back down the years.

Both are obsessive. Jones sends emails and texts to his assistants and players as late as midnight and as early as 4am. Farrell tries something for the first time and immediately has to be the best at it: making barista coffee, building a bar in his garden, learning how to barbecue ribs.

Jones challenges Farrell. Farrell challenges Jones. In the last team meeting before the final, in the team hotel in Shinjuku on Friday night, it will be Jones who willingly steps aside and lets Farrell deliver the final message.

Farrell has produced the iconic image of England's World Cup campaign this far, when he and his team-mates stared down the All Blacks' haka a week ago and he gave that little sideways smile.

In that moment you saw more of Farrell than you might have seen in the eight years that led to it. No fear, only a savouring of the challenge. No doubts, just a precise statement. 'This is me. What have you got?'

"When I saw it, it made me smile," says George.

"Because for me, it was almost Owen saying, you don't know what's coming. And I don't think they did."