Scotland crashed out of the Rugby World Cup at the pool stage for only the second time after being beaten by an irrepressible Japan in Yokohama.

Gregor Townsend's side needed four more points than the hosts but, despite leading through Finn Russell's try and mounting a comeback, they fell short.

Kotaro Matsushima, Keita Inagaki and Kenki Fukuoka all crossed before half-time, before the latter blasted over again to secure Japan's maiden quarter-final - against South Africa in Tokyo on Sunday.

Scotland, forced to go for broke in a febrile contest that had been in doubt until about 03:00 BST because of the effects of Typhoon Hagibis, scored through WP Nel and Zander Fagerson after the break.

But that second-half rally was not enough to prevent a first defeat at the hands of the Brave Blossoms in eight Tests.

The result also means Ireland finish runners-up in Pool A and will face New Zealand in the last eight in Tokyo on Saturday.

'Japan were relentless and magnificent'

After a horrendous Saturday that brought death and destruction, it was a minor miracle the game went ahead in the first place, a roaring tribute to the people responsible for clean-up after Hagibis battered this area 24 hours earlier.

There was a moment's silence for the stricken in a stadium that heaved with emotion and power. The home national anthem was haunting and ominous, a moment of foreboding for Scotland. The visitors had hoped that the sense of occasion might get to the hosts, that the pressure would grind them down as they pushed for a quarter-final against the Springboks next weekend.

So much for that tin-pot theory. In their minutes of total dominance, before Scotland came roaring back, Japan were a full of invention and pace. Their accuracy while playing at full throttle was astounding. Every Scotland mistake was punished. It was absolutely relentless. And magnificent.

What a game this was. What an occasion. The Scots had a great start, which was played at bewildering pace. Russell's cross-kick and Magnus Bradbury's follow-up created the opportunity and Russell, having started it, then finished it with a hand-off of Yutaka Nagare to score. It was probably the only less-than-perfect moment that scrum-half Nagare delivered all night.

Japan took over at that point. They lorded it over possession, whipped left and right and down the middle. Jamie Ritchie, playing utterly heroically, kept them out on 10 minutes with a terrific turnover near his own line, but that respite was short.

Before the end of the first quarter, Japan got their reward when attacking up the left through the wonderful Fukuoka, who eluded Chris Harris and drew in Stuart Hogg before chucking a one-handed offload to Matsushima to gallop away to the posts. Yu Tamura converted and the home crowd erupted.

More Japan heat and more Japan brilliance. Their second try was an epic, a thing of rugby wonder. Matsushima burst through Grant Gilchrist and Blade Thomson and away he went. What happened next was wondrous. Five sets of hands offloaded at speed as if they were on a training run. Nagare, Tamura and Shota Horie worked it to James Moore. The lock flicked it on to William Tupou, who spun and got it to Inagaki for the last act. Sheer genius, pure and simple.

The conversion made it 14-7, then just before the break came the try that looked like sending Scotland heading home. Timothy Lafaele grubbered in behind and Fukuoka seized on it to get Japan's third try. Two more points from Tamura made it 21-7 at half-time. Scotland were on the floor.

Three minutes into the second half, Japan scored again. Fukuoka ripped it from Harris and, when the ball went spinning in the air after contact, the wing caught it and sprinted off to score. Tamura made it 28-7. A rout. Or so it seemed.

Scotland needed the kind of miracle they produced at Twickenham in March. When Nel grunted his way over the line to narrow the gap, Laidlaw's conversion made it a 14-point game. Scotland were still a mile off their target. The bench got busy. Six of them came on at once - and Scotland scored again.

Hogg began it, there was a lovely one-two between the immense Jonny Gray and Scott Cummings, Gray running on and feeding Fagerson, who thumped his way through Horie to get the ball down. Russell banged over the extras this time. Seven points in it now. Still a mountain to climb, but this was pulsating stuff.

Japan were denied after another turnover by the towering Ritchie, then they asked their own questions again. It was Scottish pressure now. Chasing two converted tries and a penalty or drop goal they had to take risks, had to force the issue, had to make sure that every pass stuck, every attack counted.

They owned the ball in the closing minutes, but Japan's defence was unbreakable. Their crowd roared and roared and roared again. Scotland were not going to get the points they needed now. There was no time. For them, the battle was all about getting another try and a conversion and a draw. They bust a gut but Japan would not let them through.

Scotland are heading home. Japan? Who knows how far they're heading. Further than they've ever gone before, that's for sure. 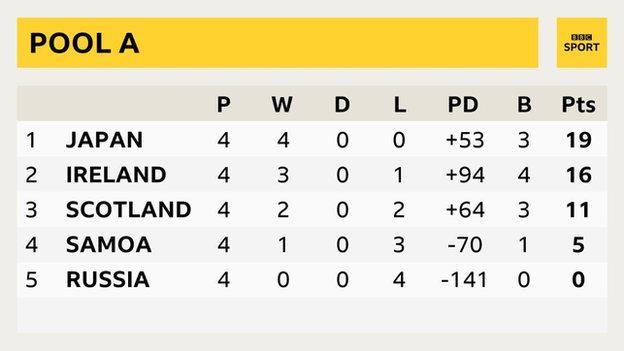