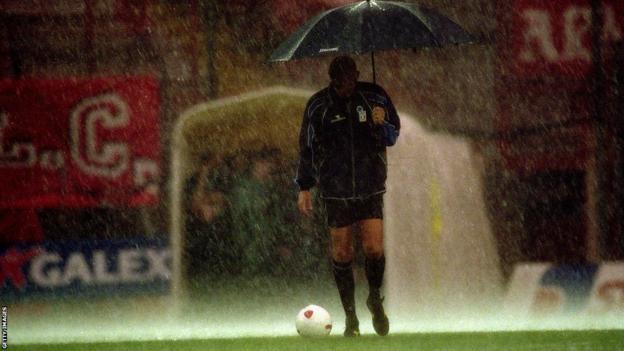 Two matches at the Rugby World Cup have been called off, and Sunday's Japanese Grand Prix is under threat of being delayed - or even cancelled - as Typhoon Hagibis takes a more northerly route than originally forecast.

Here, we look at some other times the weather had a crucial impact on sporting events:

His anger came after two attempts to play the final, between hosts Sri Lanka and India, had been thwarted by the weather in Colombo.

Because the rules at the time stated a minimum of 25 overs had to be played per side in order to make a match valid, the final was effectively declared null and both teams were awarded the trophy, to much bemusement.

Going into the last eight games of the 1999-2000 season, Italian giants Juventus were a massive nine points ahead of nearest rivals Lazio.

But then things started going wrong.

Defeats for Juventus by first Milan, Lazio themselves, then Hellas Verona meant the title was still up for grabs come the final day, though a win against Perugia would still guarantee it for the Turin side no matter what Lazio did.

But, on the day, a freak thunderstorm from the Umbrian skies soaked the players and the pitch in Perugia's Stadio Renato Curi.

The ball almost refused to leave the pitch, it was so waterlogged. Juventus - their team packed with international greats such as Zinedine Zidane, Alessandro del Piero and Edgar Davids - could not get their usual slick passing game going.

"Nowhere else that soccer was being played in Italy seemed to have the downpour, the hailstones, the thunder and lightning that rained down on Perugia," wrote the New York Times.

Unable to withstand the pressure, they lost 1-0, while Lazio - under Sven-Goran Eriksson - comfortably beat Reggiana 3-0 to seize only their second title.

At Vancouver in 2010, it was not the bad weather that was the problem - it was quite the reverse.

An unusually clement spell for winter in Canada meant the city experienced temperatures on average about 7C above zero.

This presented something of an issue at a sporting event that depends largely on snow and ice.

Efforts made to solve the problems included airlifting in snow, shooting ice and water out of cannons and driving in snow from three hours away.

More urgent methods, as the games got nearer, involved putting thousands of bales of straw on the mountain slopes and covering them with artificial snow.

The measures worked - though they led to several wry jokes from locals about the city seeking to host the summer Games too.

Having broken through into Britain's tennis consciousness in 1996 with a run to the quarter-finals, Tim Henman was the big hope the host country would have its first men's winner since Fred Perry in 1936.

But in 1998 and 1999, he had lost to Pete Sampras in the semi-final - the American at the absolute peak of his powers.

In 2001, however, Sampras was out early, and the unseeded wildcard Goran Ivanisevic was all that stood between him and a first final - against Pat Rafter.

Although a nervous Henman lost the first set 7-5, he grew in confidence when he took the second on a tie-break.

Finding his flow, he then dominated the third set 6-0 - dropping only four points and winning in just 15 minutes - and went into the fourth with all the momentum.

But at 2-1 up, a persistent, frustrating rain began to fall - these were the days before Centre Court had a roof; indeed, for British fans it ultimately illustrated the need for one.

The players had to go off and were not able to return until the next day. By this time, Ivanisevic had reset, refocused - and Henman's momentum was gone.

Ivanisevic gritted his teeth, ground out a tie-break win in the fourth, and then took the fifth 6-3 as Henman collapsed.

It was the closest Henman would ever come. The next year he did make the semis again but lost in straight sets to Lleyton Hewitt, and after that did not make it that far again.

It would take until 2013 and Andy Murray before Britain had a men's winner.

If Typhoon Hagibis does strike this weekend, it will not be the first time the Japanese Grand Prix has been disrupted by torrential conditions.

In 2004 and 2010, qualifying was postponed until the morning of the race as it was considered unsafe for cars to try flying laps in the rain.

But, most famously, the storm that hit the Fuji circuit in 1976 defined the extraordinary climax of arguably the most famous championship in the history of F1.

Championship leader Niki Lauda, who was still coming back having been horrifically burned in a crash at the German Grand Prix, qualified third, just one place behind title rival James Hunt.

On the race day, there was not just heavy rain but fog. Nevertheless, the race went ahead.

But after just one lap, Lauda pulled off the track and parked his car. His burns had made it impossible to blink to clear the water and be able to see clearly enough.

"My life is worth more than a title," Lauda said.

Hunt now only needed fourth place to win the crown. He sped off into the lead. But the weather had one more trick to play.

As the track finally began to dry, Hunt began to drop backwards. Eventually he pitted - and a problem getting the tyre on left him down in fifth place.

Hunt was so angry he did not notice that he was overtaking two drivers, finishing third - and becoming the 1976 world champion.