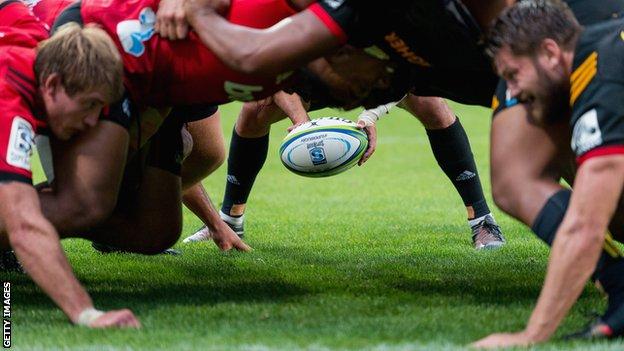 RugbyX will see the introduction of rugby's version of the 'Super Over', with drawn matches decided by a revolutionary one-on-one contest.

In the event of a draw, a single attacker from one team will try and score past a single defender from the other.

The 'one-on-one' has been included as part of the full laws of RugbyX, which have now been confirmed by World Rugby.

Rugby's newest version launches at the 02 Arena on 29 October.

England, Ireland and the Barbarians are among the teams involved at the debut tournament, which involves both men and women's teams.

Dubbed 'Rugby's Twenty20', RugbyX is a five-a-side version of the game, is full contact and played on a half-sized pitch.

Halves will be 10 minutes each, with no break in between.

Kicking is allowed, but kicks must not exceed 10 metres in height, with the distance monitored by ball tracking technology.

Among the other confirmed laws:

"The RugbyX laws have been developed with the objective of encouraging simple, fast and skilful gameplay with minimal stoppages, whilst retaining the core fundamentals of the game we love," said RugbyX Technical Director Ben Ryan.

Former England winger Ugo Monye, co-host of the Rugby Union Weekly podcast, believes the 'one on one' is a dramatic and revolutionary way of deciding a game.

The attacker will start with the ball 30 metres from the line, while the defender will begin 5 metres out, with a 10 second time limit.

"As a defender it's a nightmare, but as an attacker the pressure is on you to score," he said. "I would love to see someone like [Springbok wing] Cheslin Kolbe doing it.

"For me, RugbyX is a simplified and condensed version which cherry-picks the best bits of what rugby is."